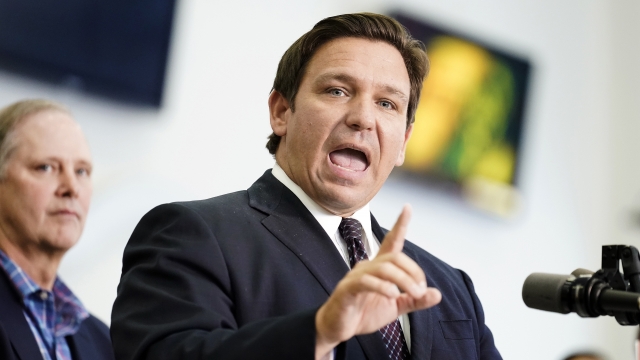 While states across the country zero in on voting laws, Florida's governor is proposing an election integrity unit to enforce election laws.

It's included among several election related items in a proposed budget. The proposal calls for $5.7 million to create an Office of Election Crimes and Security.

"This will facilitate the faithful enforcement of election laws and provide Floridians with the confidence that their vote will count," Governor Ron Desantis told state lawmakers in his State of the State address last week.

According to the proposed budget, the office will "…review and investigate election crimes and irregularities and make referrals for legal action directly to a Statewide prosecutor." It would be made up of 52 staff members, of which 20 would be sworn law enforcement officers.

Jonathan Diaz, senior legal counsel for voting rights at the Campaign Legal Center, said the concern would be in how the unit is used.

"I think the big takeaway here is that this proposal is totally unnecessary and creates opportunities for abuse and harassment of voters and of organizations that do a lot of really hard work to make sure everyone can participate in the democratic process," said Diaz. "There are election laws for a reason and Florida already has a law enforcement system that’s capable of addressing any potential violations. So you know I think this is nothing more than a political ploy by the governor to try to score some political points with his supporters and it’s not actually responding to any real problems."

The League of Women Voters of Florida also questioned the use of money for it.

"It seems to be a true waste of money and I’m not sure what goals the governor’s trying to accomplish. It’s basically trading a solution and also potential threats to the citizens for no good reason," said Cecile Scoon, the president of the organization.

"I think anything that harks back to government interference, government standing and looking. The impression you have when the poor people are trying to go across the Selma Bridge It has that connection. The government standing in judgement, what are you doing and potentially interfering and certainly bringing back memories of bad, bad times when there’s been no need," said Scoon.

In response to criticism over the proposal, a spokesperson for the Governor's office said the team would serve as a "powerful deterrent to would-be perpetrators of election fraud."

The spokesperson said Desantis doesn't direct law enforcement in their day to day responsibilities and wouldn’t tell which specific allegations to investigate or not. "The governor simply wants to ensure that Floridians will have a clear, straightforward way to report suspected voter fraud, so that a dedicated team of law enforcement personnel can address it in accordance with the law," the spokesperson stated.

With the Florida legislative session recently underway, it remains to be seen if lawmakers will take up the proposal.

"First of its kind that I know in the country where they would have just a group of people who are tasked with looking at election fraud. I will say I think even a number of Republican legislators have questioned this. It still may pass by the way but I do think this may be one of the few things the governor asks for that he doesn't get, because there’s a lot of Republicans who wonder is this really worth it," said Aubrey Jewett, Ph.D.

Jewett is a political science professor at the University of Central Florida. He said Desantis announcing the program may float the idea to other states, especially Republican led ones.

"Donald Trump and the Trump faction of the party have continued to insist the election was stolen from Trump. So for most Republican politicians they have to figure out a way to go on record in showing they’re doing something about election security and they're taking it seriously. And so Florida last year passed a number of bills into law that would try to shore up elections or at least from the republican point of view. From the Democratic critics point of view they were basically voter suppression trying to stop Democratic bases from voting," said Jewett.

Recently Democratic members of Florida's congressional delegation, including those running against Florida Republican leadership, asked Attorney General Merrick Garland to investigate voter suppression. The letter states, "Harmful proposals to create new partisan bodies to oversee our voting process are exactly the kind of action that demand oversight as we work to ensure that our voting process is unquestionably trustworthy."

Rep. Darren Soto, who signed the letter, called the unit a voter intimidation strike team. "It's a clear voter intimidation tactic but we don’t even have to look to his proposals. Just look at the changes in the law already from last year," Rep. Soto said, explaining they want the Department of justice to sue Florida for violating the voting rights act.

A spokesperson for the governor’s office said he never “proposed creating ‘partisan bodies’ to oversea voting."

"Ensuring that every legal vote counts, as Governor DeSantis strives to do, is the opposite of "voter suppression." We do not understand why any politician, Democrat or Republican, would be opposed to enforcing our election laws and securing the integrity of the process," the spokesperson said.