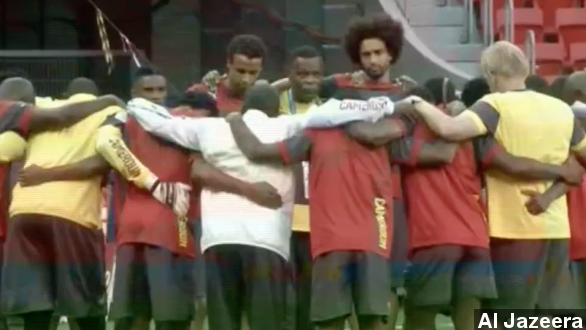 By Cliff Judy
July 1, 2014
German magazine Der Spiegel says a well-known match fixer was able to predict the result and score of a Cameroon loss along with a player's red card.
SHOW TRANSCRIPT

Yet another World Cup corruption investigation. This time, though, we're not talking about games leading up to soccer's biggest stage or bribes to host the games.

Cameroon's own soccer federation says it's investigating whether players fixed World Cup games in Brazil. The team lost all three of its games, twice getting beaten badly by teams admittedly ranked much higher than them. (Via Al Jazeera)

Questions arose after German magazine Der Spiegel wrote a known match fixer named Wilson Raj Perumal correctly predicted to the magazine not just the result and score of Cameroon's 4-0 loss to Croatia, but that one of the players would get a red card in the first half.

Alex Song received that red card for throwing an elbow into the back of a nearby opposing player. Perumal wrote before the match Cameroon had "seven bad apples" on the team. (Via The Washington Post)

Cameroon's soccer legislative body FECAfoot issued this statement Monday. It read, in part, "We wish to inform the general public that, though not yet contacted by FIFA in regards to this affair, our administration has already instructed its Ethics Committe, [sic] to further investigate these accusations."

While fixing an actual World Cup game would be a huge blemish on Cameroon and even African soccer in general, it is just one incident in a long history of game fixing or corruption allegations related to FIFA.

The New York Times obtained FIFA's own investigational report on match fixing and then published it last month. It alleges as many as 15 matches leading up to the 2010 World Cup in South Africa were fixed, and the Times profiled one referee who deposited $100,000 into a South African bank the day of a game.

Bribery and corruption allegations also dogged FIFA almost from the day they announced which country would host the 2022 World Cup.

As for the 2014 World Cup, Cameroon, Nigeria and Ghana's teams already received off-the-field attention for disputes over pay and bonuses. Ghana's players even considered going on strike if not given the money they say they were promised. (Via Al Jazeera)

The presidents of both Cameroon and Ghana have now called for investigations into their teams' play at this year's World Cup, as the two nations combined for five losses and one tie.