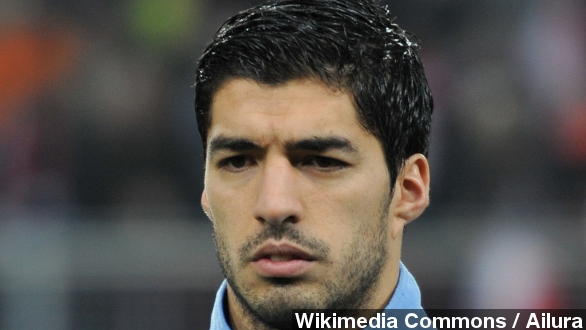 By Matt Picht
June 26, 2014
FIFA has suspended Uruguay's Luis Suarez for nine games and banned him from the sport for four months after he allegedly bit another player.
SHOW TRANSCRIPT

Uruguayan soccer star Luis Suarez's love of Italian food might have jeopardized his country's World Cup dreams. FIFA's disciplinary committee banned Suarez from the pitch after he allegedly took a bite out of another player.

Suarez's pearly whites went viral Tuesday after he seemed to sink his teeth into the shoulder of Italian defender Giorgio Chiellini during Uruguay's 1-0 victory over Italy. It's the third biting incident Suarez has been accused of over his career. (Via Twitter / @Chrisreed619, @Brilliant_Ads, Vine / NoRulesFooty)

Suarez wasn't penalized in the game, but FIFA clamped down hard on the footballer Thursday, banning him from Uruguay's next nine official games and suspending him from all FIFA soccer for four months. The organization also fined Suarez 100,000 Swiss francs. (Via ITV)

The suspension means Suarez won't be making another World Cup appearance, despite the fact that his team has moved on to the round of 16.

That might be a problem for Uruguay, since their first opponent in the knockout round is the fearsome Colombia team, which won all three of their group games and scored seven goals to boot. By way of comparison, Uruguay only managed two wins and four goals — and two of those goals were from Suarez.

Uruguay's football league, understandably upset by the whole ordeal, says they will appeal the ruling. Some of the country's soccer officials even claimed pictures of the bite were photoshopped to rob them of their star player. (Via The Washington Post)

But Suarez's troubles won't end when the World Cup does — the ban also extends to the English Premier League, which means his professional team, Liverpool FC, will be a bit ... well, toothless for up to their first 13 games. (Via The Guardian)

And that lengthy absence from the pitch might damage Suarez's career. A former Liverpool captain told the BBC Suarez's history as a serial biter should make the team think twice about keeping the forward around.

"From a Liverpool perspective, I think they've got to draw a line under this and say 'One more indiscretion, and it's all over.'"

But a writer for The Telegraph disagrees, arguing Suarez's sins will all be forgiven as long as he can keep putting the ball in the back of the net.

"Football is littered with players who have shocked the game by their actions, but history shows that clubs will always stand by them if they are match-winners. ... They will give him one last chance, again, because Brendan Rodgers and the Liverpool owners will know that any prospects they have of winning the Premier League next season will be gone if Suárez leaves."

So, all in all this whole biting thing has been an embarrassing lowlight of the tournament and thrown a talented player's career into doubt. But there are some upsides!

For example, this Copacabana poster featuring Suarez has grown a lot more popular with tourists in the past few days. (Via Telemundo)

And the Uruguayan's tactics inspired actor Will Ferrell to do his part for Team USA before Thursday's match against Germany.