Fed: US Economy Growing Steadily, But There Could Be Some Risks Ahead 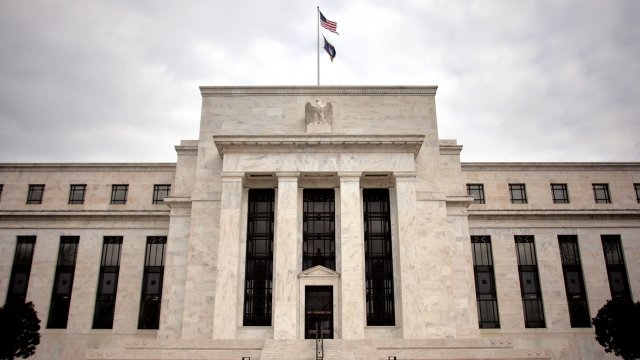 SMS
Fed: US Economy Growing Steadily, But There Could Be Some Risks Ahead

By Cristina Mutchler
November 28, 2018
The central bank released a report on vulnerabilities to the financial system Wednesday, which include Brexit and trade tensions with China.
SHOW TRANSCRIPT

The U.S. economy is still growing strong, but there could be some hiccups down the road, according to the Federal Reserve.

On Wednesday, the central bank released a report on vulnerabilities in the financial system. It outlined a series of potential outside risk factors, like trade tension with China and the Brexit deal, that could affect U.S. markets and financial firms.

The Fed raised interest rates three times this year, indicating the U.S. economy is in pretty good shape right now. There's a fine line between hiking rates steadily to keep the economy balanced and raising rates too quickly, which experts say could lead to a recession.

Powell's been facing ongoing criticism from President Donald Trump about the rate hikes. Earlier this year, Trump said he wasn't a fan of the central bank raising interest rates under Powell's leadership. The president echoed that claim during an interview with the Washington Post Tuesday, saying he wasn't "even a little bit happy" with his appointment of Powell.