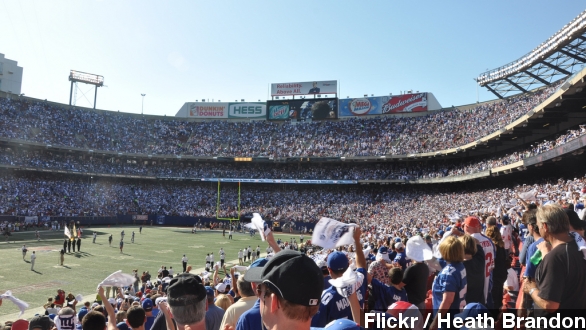 By Matt Moreno
December 18, 2013
The FCC says its rule of blacking out local games if a certain number of tickets aren't sold could be outdated.
SHOW TRANSCRIPT

Sick of seeing nothing when your favorite local team doesn't sell enough tickets?

Well, lucky for you, the Federal Communications Commission is moving forward with plans to possibly end TV blackouts for sports games.

"Right now, the league will black out games in local markets if the home team does not sell the vast majority of empty seats in their stadiums. The FCC will look if these rules are still fair." (Via CNN)

The rule was first implemented to encourage fans to purchase tickets to games, but the FCC feels that 40-year-old rule might be outdated.

Official FCC documents about the issue say the agency "will determine whether the sports blackout rules have become outdated due to marketplace changes since their adoption, and whether modification or elimination of those rules is appropriate."

The FCC mentions NFL games are most affected by the rule, keeping local viewers from seeing their team play if the live stadium event isn't sold out 72 hours prior to the game. (Via Politico)

Fans and some Washington lawmakers have griped recently that ticket prices are set so high that many fans can't afford them.

And Sports Illustrated points out FCC officials previously proposed removing the rule in early November, saying high ticket prices and a tough economy put attending games out of reach for many fans.

The FCC hasn't made a final decision on axing the rule yet. Bloomberg reports, "Eliminating the rule would require a vote by the agency following a public-comment period."

A final decision on the rule is expected sometime next year.