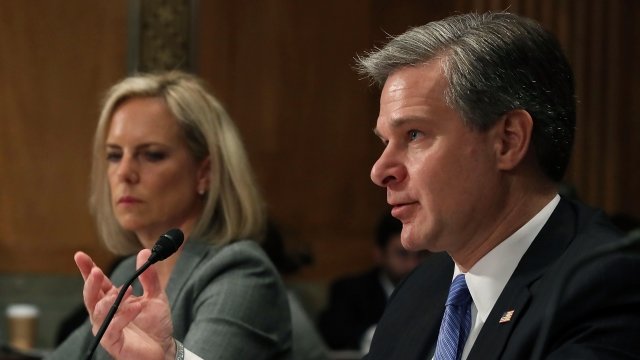 By Stephanie Liebergen
October 10, 2018
While testifying before a Senate committee, Christopher Wray said the investigation was both "standard" and "limited in scope."
SHOW TRANSCRIPT

The FBI's director insists the investigation into sexual assault allegations against Brett Kavanaugh was "standard."

FBI Director Christopher Wray testified before the Senate Homeland Security Committee Wednesday in a hearing that was supposed to focus on threats to the homeland. But at least one senator wanted to know more about the Kavanaugh investigation.

"Do you know who determined that the FBI would not interview Judge Kavanaugh or Dr. [Christine Blasey] Ford or the list of 40-plus witnesses?" Sen. Kamala Harris asked.

According to The New York Times, Wray had to walk a fine line in his answer. He likely didn't want his response to imply the White House had limited the scope, but he also probably didn't want to open up the FBI to criticism for not completing a thorough investigation.

Many Republicans were happy with the effort put into the FBI report, while Democrats criticized it for being "incomplete."