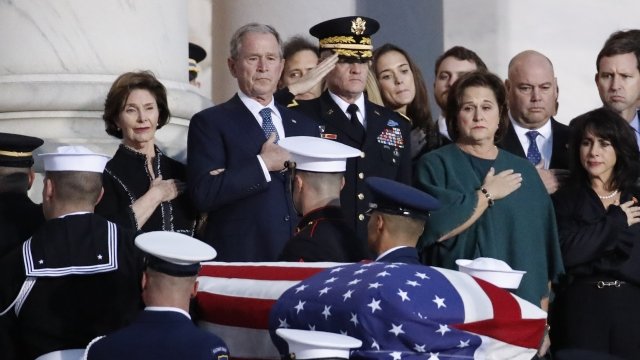 His casket arrived just outside of Washington, D.C., Monday aboard Air Force One. But since the jet is only called that when the president is flying, it was redesignated "Special Air Mission 41" to honor the country's 41st president.

Bush's casket was then taken to the U.S. Capitol, where it arrived to a 21-gun salute.

Among those to pay their respects Monday were members of Bush's family, President Donald Trump and first lady Melania Trump, and members of Congress.

"Throughout his life of service, President Bush personified grace. His character — his character was second to none," House Speaker Paul Ryan said in a tribute at the Capitol.

Bush's body will remain at the Capitol until Wednesday morning. A state funeral will be held later that day at Washington National Cathedral. Bush will then be buried Thursday at his presidential library in College Station, Texas.