Is A 2016 Bill Veto To Blame For California's Recent Wildfires? 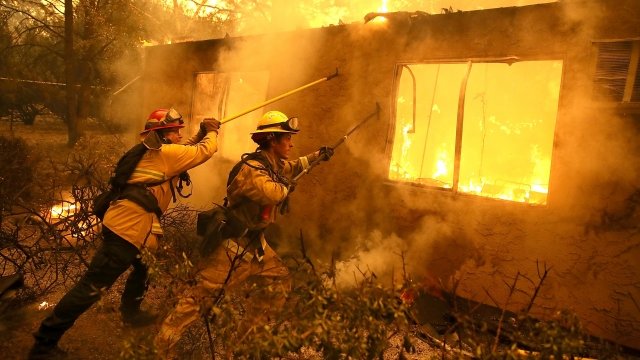 SMS
Is A 2016 Bill Veto To Blame For California's Recent Wildfires?

As California starts to recover from the devastation of the recent Camp and Woolsey Fires, some people are looking back at what could've been done differently.

The two late-season fires burned a combined 250,000 acres and killed at least 91 people. California's wildfire season has been getting longer. Half of the state's top 20 largest and most destructive wildfires have happened in the past decade.

So what's to blame for the intensity of these major fires? Recent stories posted on some conservative-leaning websites place some blame on California Gov. Jerry Brown. The articles pointed to a 2016 bill Brown vetoed.

That bill would have required California's Public Utility Commission to identify areas where electrical lines and equipment posed an increased fire hazard. That work would've been done in coordination with the state's fire division, known as Cal Fire.

In his veto message, Brown said the commission and Cal Fire were already doing that work. And he said the concerns raised in the bill should be brought up in the already-existing forum.

Critics of the veto say the bill would have sped up the process and gotten local governments more involved. But the commission disputes that, saying it would have slowed down the work already underway.

That work resulted in a new statewide fire threat map that was approved in January 2018. And new regulations from the commission require utility companies to prioritize fire prevention efforts in the highest-risk areas.

Yes, Brown did veto a bill aimed at reducing wildfire risk. But did it impact the following fire seasons? There's no way to know for sure, but there's no direct evidence that Brown's 2016 veto increased wildfire chances.