No, These Pictures Don't Show The Migrants Burning The American Flag 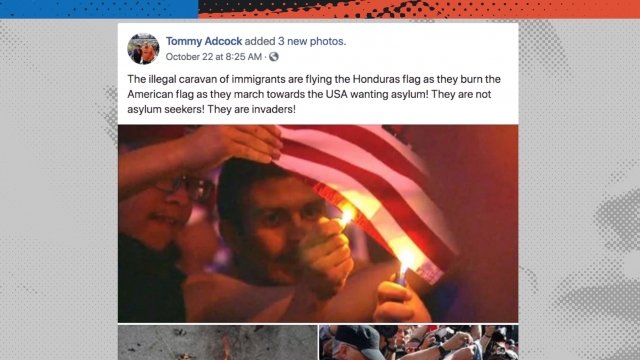 SMS
No, These Pictures Don't Show The Migrants Burning The American Flag

By James Packard
November 2, 2018
These photos were said to depict migrants in the Central American caravan burning the American flag en route. That's not what they show.
SHOW TRANSCRIPT

Have you seen those photos on Facebook? The captions claim they show the caravan of migrants burning the American flag on their way to the U.S.-Mexico border.

This Facebook post, for instance, was shared well over 20-thousand times. It includes three photos of supposed migrants burning flags. Yeah, that's not what's happening there.

The first photo sure appears to show a man burning an American flag. It doesn't. It shows a man burning a Trump campaign flag. That was in New Mexico in 2016.

The second photo is a Getty Image taken in London in 2010. People were protesting U.S. pastor Terry Jones, who had called for an "International Burn a Quran" day to coincide with the anniversary of 9/11.

The third image is from Reuters. It shows protesters burning an American flag outside the Republican national convention in 2016.

There have been no credible reports of migrants in the caravan burning the American flag.

An Associated Press photographer did capture a picture of two people burning an American flag in front of the U.S. embassy in Honduras in mid-October. They reportedly did so in support of the migrant caravan, but the caravan itself was at the Mexico-Guatemala border at the time.

The circulating photos are meant to give the impression that the caravan is hostile to the U.S. So far there's no indication that's the case. Migrants who've talked to reporters on the ground say they're fleeing violence or persecution in their home countries. They want to seek asylum in the U.S.