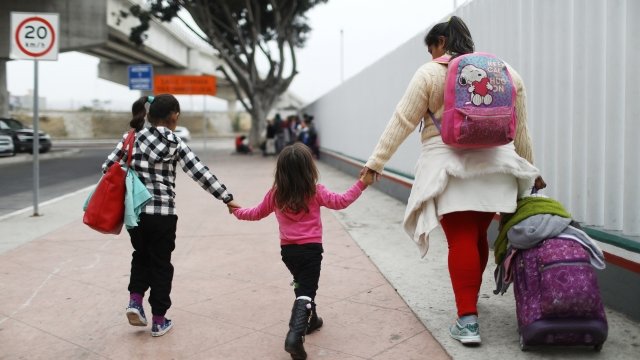 A meme on Facebook wants you to believe that "illegal refugees" get thousands of dollars a month from the government.

The image was posted in late October, and it's been shared over 89,000 times. It claims "illegal refugees get $3,874 per month under the federal assistance program." It compares that amount to Social Security checks, which it puts at $1,200 per month. A nearly identical claim also made its way to Twitter, where it was retweeted by President Donald Trump.

Assuming the post is referring to refugees and not immigrants, there's an important clarification — refugees aren't in the country illegally. By definition, gaining refugee status grants someone permission to live and work in the U.S. Migrants can't walk across the border, deem themselves refugees and magically rake in thousands of dollars each month. And anyone who is in the U.S. illegally doesn't qualify for most forms of government assistance, like food stamps or Social Security. But they can go to public schools and receive emergency medical care.

Which leads us to another correction — the first number in this post isn't even from the U.S. The $3,874 number stems from a different false post about refugees in Canada. It pointed to a document and claimed one person received that much money each month. But that assistance was actually for a family of five, and the $3,874 included multiple one-time payments, not monthly assistance.

Refugees in the U.S. do get some help paying bills when they arrive, but the amount varies. That help is distributed by states, which later get reimbursed by the federal government.

People without children typically turn to the Refugee Cash Assistance program. It offers financial help for their first eight months in the U.S.

In light of the migrant caravan reaching the U.S. border, the meme seems designed to stoke anger and resentment. But its key fact is just plain wrong.

One thing the post gets kind of right is the part about Social Security benefits. The meme says the checks average $1,200 per month. In October 2018, the average money benefit check in the U.S. was just over $1,300.