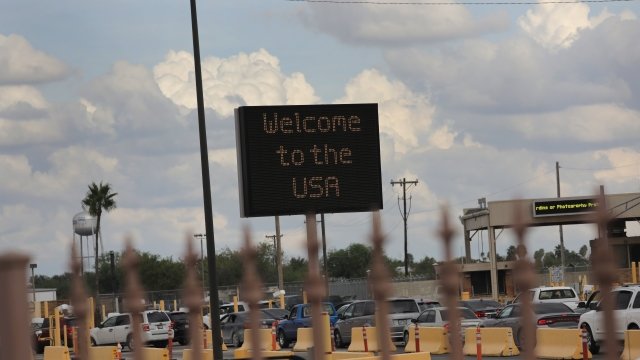 By James Packard
November 9, 2018
A photo on Facebook that suggests migrants bring diseases to the U.S. is misleading.
SHOW TRANSCRIPT

This post on Facebook suggests photographic evidence that migrants coming into the U.S. bring disease with them. It was shared thousands of times. The caption reads, "Is this really the future we want for our children?" followed by a long list of diseases.

It's not explicit in the caption, but it doesn't take long to figure out what the post is talking about. The group that wrote it is called "Montgomery County Citizens Against Illegal Immigration." Montgomery County is in Texas, just north of Houston.

The post is part of a long history of claims that immigrants, especially undocumented immigrants and those from Central America, are bringing deadly diseases into the U.S. But while the spread of disease is complicated, there's not much evidence linking immigration, legal or illegal, to disease outbreaks.

First, the post includes polio in its list of diseases. According to the Global Polio Eradication Initiative, there have been 25 confirmed cases of polio worldwide this year, isolated to Pakistan and Afghanistan. So that's clearly false. On top of that, the nonpartisan think tank Migration Policy Institute points out there's usually not one group responsible for spreading a disease, and there's no evidence immigrants carry more infectious diseases than travelers generally.

The CDC says the area near the U.S.-Mexico border is prone to the spread of infectious diseases. But it blames those risks primarily on legal travel — in both directions — not immigration.

More important context: The picture attached to the Facebook post is from 2014. It shows a man at a Customs and Border Protection facility in Texas. The man pictured was part of an influx of migrants that year, which created a backlog of cases. As a result, facilities housing migrants filled up. At the time, advocacy organizations had filed complaints with the Department of Homeland Security, claiming migrants were being kept in unsanitary conditions. The man had a condition called scabies, a treatable skin condition. It spreads rapidly in crowded conditions, like those in which the government was keeping him.

The caption on the photo leaves all of that out.

But, news about the caravan of Central American migrants moving through Mexico could color the picture and its caption more specifically. Conservative commentators have ginned up baseless theories that the caravan would infect people in the U.S. with deadly diseases.

The New York Times points out there's no evidence the migrant caravan is bringing diseases with it. Groups assisting the caravan have said the people in it plan to seek asylum. According to experts at the University of Washington, anyone granted asylum status is recommended to get a medical screening. If they apply for adjusted status after that, it's required.

And any family members who join them in the U.S. once they're granted asylum would also have to get a screening. According to the CDC, if an immigrant or refugee has a medical condition that would prevent them from coming to the U.S, they're only allowed to stay if they're granted a waiver. That waiver would ensure they'll get an evaluation for treatment within 30 days.

In short, the Facebook post is intended to stoke fear about migrants bringing diseases to the U.S. There's no evidence migrants are more to blame for spreading illnesses than travelers. We should also note there's no evidence the current Central American migrant caravan is bringing any diseases, let alone diseases that would pose a widespread threat.