This Interactive Exhibit Is Teaching Americans About Displacement 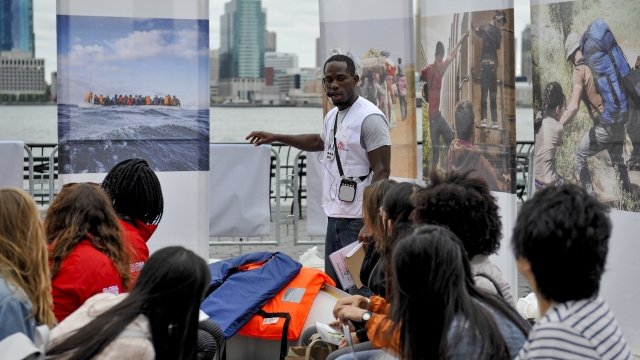 SMS
This Interactive Exhibit Is Teaching Americans About Displacement

By Melissa Prax
October 10, 2018
Around the world, 68.5 million people have been forced from their homes.
SHOW TRANSCRIPT

This exhibit shows the journeys taken by people who are forced to leave their homes.

"At the beginning of the exhibit, everyone gets a card like this, which will categorize people as either an internally displaced person [or] an asylum-seeker or refugee. I am an-asylum seeker from the Islamic Republic of Afghanistan," Newsy's Melissa Prax said.

The free exhibit is put on by Doctors Without Borders. It's traveled to various cities in the U.S. since 2016, and this is the last year of the tour. 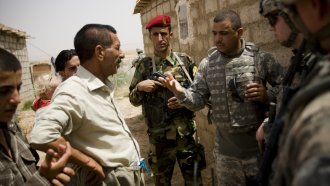 The US Is Taking In Less Refugees. That Could Put It At Risk.

"From when you first started doing this exhibit to now, has there been different focuses in changes in terms of the countries that you're looking at?" Prax asked.

"Now, we have stayed with the five countries for the three-year tour ... those being Honduras, South Sudan, Burundi, Syria and Afghanistan. ... But the rhetoric and sort of additions that we've made have all come from things that are happening in the field," said Megan Benckert, a head nurse with Doctors Without Borders.

Each step of the tour is guided by Doctors Without Borders workers who've previously spent time in the field.

"I've done four missions in South Sudan. I've worked with both internally displaced populations and refugee populations. Primarily, conflict and ethnic tensions is the main reason why you see a lot of the internal displacement," Benckert said.

The tour aims to cultivate empathy and understanding through nine different stations.

Benckert said: "At this station, what we're asking people to do is imagine that you're being forced from your home and to see some of the household items that you might have. I sort of explained: 'Maybe you hear this plane coming that's about to drop these bombs on you, and you need to very quickly gather about five items with you. And you're going to use them throughout the exhibit to maybe pay a human trafficker to get yourself across the border, to barter for something in a market, to meet some of your basic needs.' So these are used throughout the exhibit, but they are to represent what you might have in your home and how quickly you will have to grab your items if you were being forced from home."

But the exhibit also shows how Doctors Without Borders carries out a medical response to people who've been displaced. There are specific medical issues people in refugee camps may face, but they may also be dealing with chronic conditions like diabetes or asthma. And that's something that our guide said is pretty mind-blowing for some participants.

Benckert said: "Yesterday, I did a group and this was a light bulb moment for her. I said, 'You're here representing somebody that's just as normal as you are, feels the same way you do, experiences the same things, have the same basic needs as you do, the same health concerns that you do.'"

"You were saying how this is kind of representing the different living conditions people in camps would be? And so this is more of an internally displaced person. Could you explain some the other ones as well?" Prax asked.

"This is more for refugees, what we've seen in places like Bosnia. This is like France. So obviously a bit different, something that's been not put together but provided by an agency. But again, stressing that it's the time that they may spend in this type of living condition, and possibly the location. So while maybe we want to take it out on a summer trip to go camping when it's nice outside, if you're in this in the dead of winter and this is your only shelter, it's not such a great living condition," Benckert said.

The latest numbers from the UNHCR show 68.5 million people worldwide are displaced.