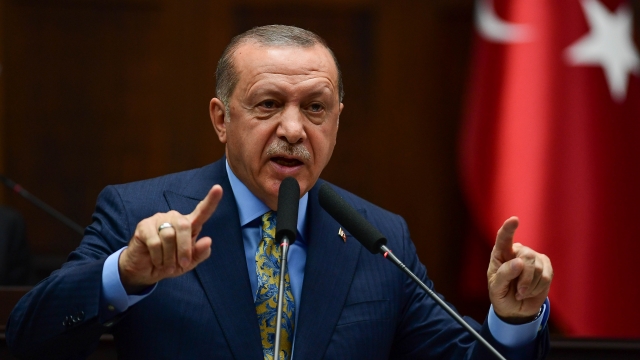 SMS
President Erdoğan Says Turkey Has Captured Dead ISIS Leader's Wife
By Alec Larson
By Alec Larson
November 6, 2019
Turkey's president didn't offer any other details, such as the wife's name or how and when she was captured.
SHOW TRANSCRIPT

Erdoğan did not share any other details such as how and when the wife was captured or even her name. Baghdadi reportedly had multiple wives, and President Trump said two of them died in the raid that killed Baghdadi.

Other members of Baghdadi's family have already been captured. Earlier this week, Turkey said it had captured his sister, Rasmiya Awad. A Turkish official reportedly said Awad is suspected of affiliating with ISIS and called her capture an intelligence "gold mine."

In his announcement, Erdoğan criticized the highly public manner in which President Trump revealed the details of Baghdadi's death. He said: "The United States said Baghdadi killed himself in a tunnel. They started a communication campaign about this. ... But I am announcing it here for the first time: We captured his wife and didn't make a fuss like them."

President Trump and Erdoğan are scheduled to meet at the White House next week.