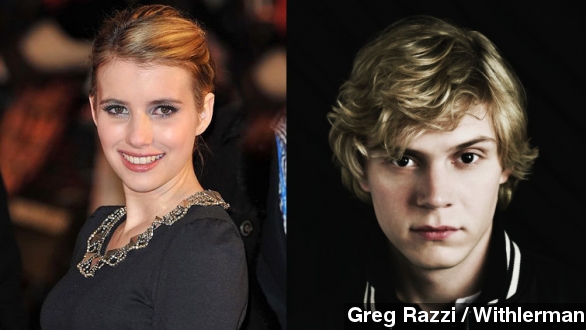 By Lauren Zima
January 7, 2014
The young actors, and co-stars on FX's "American Horror Story" are reportedly engaged. In July, they made headlines for a domestic dispute.
SHOW TRANSCRIPT

Emma Roberts and Evan Peters are reportedly locking it down.

Twenty-six-year-old Peters and 22-year-old Roberts are co-stars on FX's "American Horror Story." Extra was first to report the young lovebirds are engaged.

The outlet reported Peters popped the question over the holidays in New York City, proposing with a "pink gold diamond ring."

The pair have been dating since 2012. They first met on the set of the independent film "Adult World" with John Cusack. (Via IFC Films)

The pair kept their romantic life pretty private, though, until last summer. (Via Instagram)

In July, Roberts was arrested in Montreal after a fight with Peters in their hotel room. There was apparently evidence she had bitten him, but Peters did not press charges. (Via TMZ)

The two released a statement saying it was all a misunderstanding, and they stayed together throughout the ordeal. And now, seems they'll be together forever, though neither has officially confirmed the engagement.