The Boring Company Shows Off Its Loop Test Tunnel 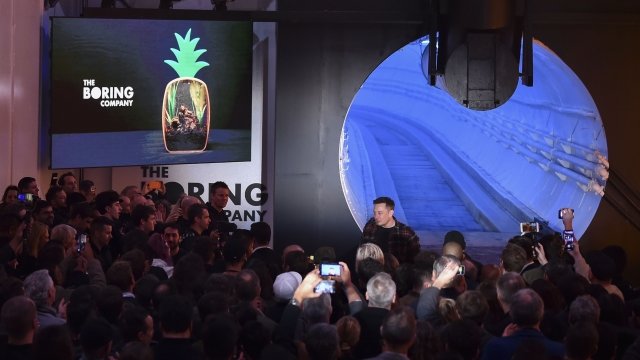 That something is a tunnel. Or, if Musk's vision becomes reality, a network of underground tunnels he says would be "a real solution to the soul-crushing traffic that plagues every major city on Earth."

On Tuesday, he unveiled The Boring Company's Hawthorne Tunnel. It's a one-mile test tunnel located in Hawthorne, California, that will be used for research and development.

Musk describes the proposed network like an underground 3D highway system. First, a lift or elevator lowers a car into a tunnel. Next, special guide wheels attach the car to the tunnel's track. Then the car moves at speeds of up to 150 mph to its destination or exit ramp, which Musk says can be located most anywhere because of their relatively small size.

According to The Boring Company, the tunnels will only work with autonomous electric vehicles that are fitted with retractable guide wheels.

Musk also says the system is meant to complement public transportation, not replace it. And even if you don't have a car, you'll still be able to use it.

Long-term, he says he wants to connect these tunnels to another one of this underground tunneling projects called the Hyperloop, which is a planned multi-city, ultra-high-speed public transportation system.