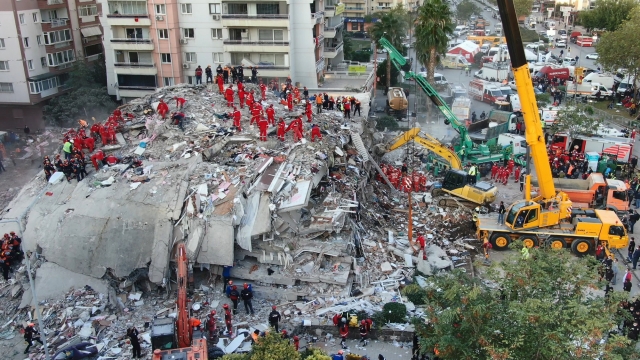 A powerful earthquake in Turkey and Greece has killed at least 30 people and injured more than 800 others. Rescue teams are searching for survivors or more victims in the aftermath of the quake and a resulting subsequent tsunami.

The earthquake and its hundreds of aftershocks toppled eight buildings in Turkey's third largest city, with one collapsing wall killing two teenagers. Teams have rescued around 100 people so far after searching through piles of debris and concrete blocks.

Rescuers lifted a teenager and her dog out of an eight-floor apartment building's wreckage early Saturday. And in another collapsed building, rescuers were clearing a path for a woman and her four kids to get to safety.

Turkey is crossed by fault lines, so the area is familiar with earthquakes. In 1999, two quakes there killed some 18,000 people. Authorities are now warning residents to stay away from damaged buildings they fear could collapse, as 5,000 rescue personnel are deployed.

No tsunami warnings were issued for the ensuing wave that hit the Turkish coast and drowned one elderly woman. Greek authorities have told people to stay away from the country's shores and to be on alert for high waves amid more aftershocks.

Tension between the Greece and Turkey have been high as both are facing off in the eastern Mediterranean over maritime boundaries and energy exploration rights. But in a show of solidarity, government officials from both countries have shared mutual messages of unity.

Greece's prime minister said, "I have already contacted President Erdogan, emphasizing that, beyond the difficulties in our relations, in these moments the unity of our people is paramount, because for us, the protection of human life transcends borders and differences. I thank him for the positive response to my call."