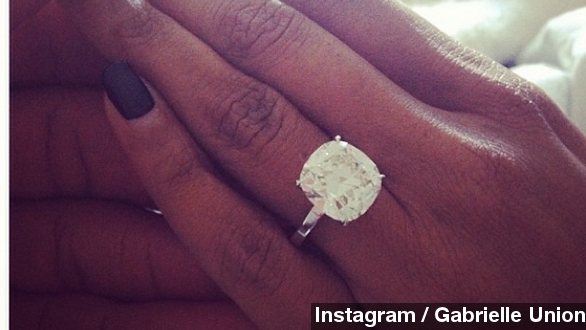 That's how actress Gabrielle Union broke the news to her fans Saturday that she and D-Wade are finally engaged after dating since 2009. (Via Fusion)

The NBA star also made a little announcement of his own: "She said YES!!!" (Via Twitter / @DwyaneWade)

The relationship has shown the beauty is a bit of a cougar, as the 41-year-old is 10 years older than her soon-to-be hubby.

This will be the second marriage for both Union and Wade. She was married to former NFL player Chris Howard for five years. (Via BET)

And Wade was married to Siohvaughn Funches, the mother of his two sons, Zion and Zaire. (Via The Huffington Post)

The two had a very public and messy divorce battle. He was eventually granted sole custody of the kids. (Via TMZ)

"I think we both kind of rushed into marriage, and neither one of us was successful at that. So now we're like: 'Let's take our time. If the goal is forever, what are we rushing for?'" (Via Access Hollywood)

Wise words from the woman Wade is obviously so in love with. Back in 2012, he told Oprah about how Union makes him feel.

"The biggest time she makes my eyes sparkle is when Zaire comes home, homework is a little harder that day, he's stressing. She goes over to the table with him, she sits down until he gets it. ... I know her love is deeper than just me." (Via OWN)

There's no word yet on any plans for the wedding, but we have no doubt it will be fabulous.