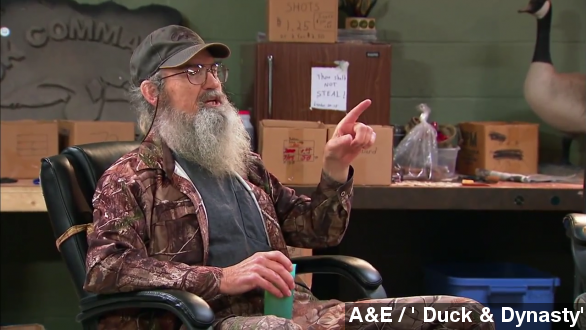 By Briana Koeneman
January 25, 2014
"Duck Dynasty's" ratings have taken a turn for the worse in the weeks following the Phil Robertson interview controversy.
SHOW TRANSCRIPT

"Duck Dynasty's" ratings have taken a turn for the worse in the weeks following the Phil Robertson interview controversy.

According to Variety, only 6.65 million viewers tuned in to watch Wednesday night's episode of the A&E show. That's down nearly two million from the 8.5 million viewers who watched the season five premiere last week.

And that 8.5 million is down from the 11.77 million people who tuned in for the fourth-season premiere last August.

E! points out those ratings are the lowest for an original episode of the popular show since December 2012.

Of course, while no one knows for sure, some are blaming the sudden drop on the controversy "Duck Dynasty" found itself tangled in after star Phil Robertson made some derogatory comments during an interview. (Via A&E / "Duck Dynasty")

Both Robertson and the show immediately got massive backlash for the comments, including from gay rights group GLAAD.

All this being said, The New York Times points out the show's post-controversy ratings are still a lot better than its competition. "'Duck Dynasty' remains a powerhouse. Both its total viewer numbers and its 18-49 rating dwarf almost everything else on cable television."