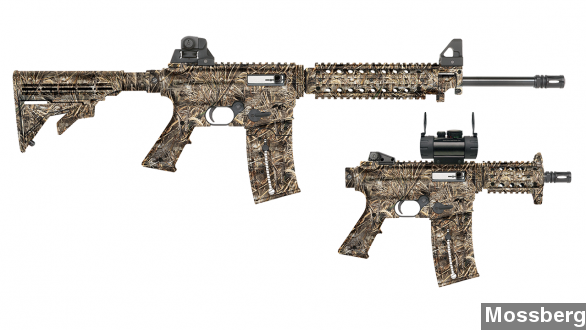 "Do you know what makes me happy, ladies and gentlemen? To blow a mallard drake's head smooth off." (Via Mossberg)

Several Mossberg ads featuring the Robertson boys hit the web Thursday. The partnership is based solely through the family-owned company Duck Commander and is not tied to A&E.

On its website, Mossberg says not all the guns are intended for hunting. A spokesperson for the company explained to CNN the specifics of its camouflaged assault rifle and pistol.

"The pistol and one of the rifles have military-style designs with large capacity magazines holding at least 25 rounds. The rifle has some of the features of an assault rifle, but with a relatively low .22 caliber." (Via CNN)

Unsatisfied with the description, Gawker mocked the company for putting out an assault weapon while also trying to downplay its assault features.  It also took aim at the advertisement's haunting imagery.

"... [they] ritualistically prepare for their exodus into the field and the subsequent duck kills, with pacing and music that conjures images of Kurtz in Apocalypse Now."​ (Via Gawker)

The new line of guns comes just on the heels of Duck patriarch Phil Robertson's suspension — and then reinstatement — by A&E over anti-gay remarks he made in a GQ interview.

And more recently, an old video of Robertson resurfaced in which he advocates teen marriage.

But Bustle points out those comments haven't hurt the Robertsons in the eyes of their die-hard fans, and those are the ones most likely to buy the new guns, anyway.

"It's those passionate fans who will likely turn this new gun line into a success, no matter the timing. After all, Duck Dynasty is more than a popular show, it's an entire brand. The family made over $400 million in merchandise sales in 2013 alone." (Via Bustle)

Mossberg has not named the retailers who will carry the Duck Commander firearms, but they are currently shipping, so expect to see them on store shelves soon.