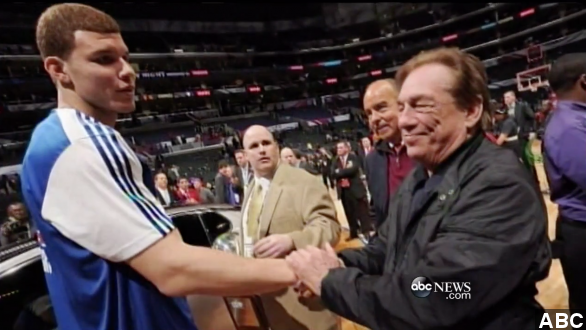 By Christine Slusser
May 30, 2014
The Los Angeles Clippers may be sold to former Microsoft executive, Steve Ballmer. Donald Sterling has been deemed "mentally incapacitated."
SHOW TRANSCRIPT

Donald Sterling's wife, Shelly, has entered into a binding contract with former Microsoft exec Steve Ballmer to sell the LA Clippers. But Donald Sterling doesn't have to sign.

"I can tell you right now, there is a signed, binding document between the Sterling family trust and Steve Ballmer to buy the Clippers for $2 billion."

USA Today explains Sterling lost the authority to stop the sale once he was deemed mentally unfit because The Sterling Family Trust, which actually owns the team:

" ... spells out provisions and procedures related to the mental capacity of the trustees, and Donald Sterling did not meet the standard in a determination by experts.​"

ABC reports Donald Sterling's lawyer has said he will "fight to the bloody end."

"The NBA is trying to force Sterling to sell, punishment for his now infamous racist rant. Sterling has already been kicked out of the game for life, slammed in the court of public opinion, benched by the NBA."

However, even though there is a signed contract, nothing is set in stone. The contract may not go through, if:

- The NBA doesn't agree with it, or it doesn't approve Ballmer's candidacy for the team

- It's not approved by 3/4 of the Board of Governors

- Donald Sterling files a lawsuit and fights the decision

"The last NBA team to sell was the Milwaukee Bucks for $550 million. Just dwarfs that. The league isn't commenting tonight." (Via KTTV)

As for Ballmer, the man with $2 billion in his pocket? Time reports he spent 14 years at Microsoft. He says he won't relocate the Clippers, and if he does take over the team, he'd be the richest owner in the NBA.

Interestingly, Forbes lists him as the 35th wealthiest person in the world.