Does Patent Ruling Mean An End To The Redskins Name? 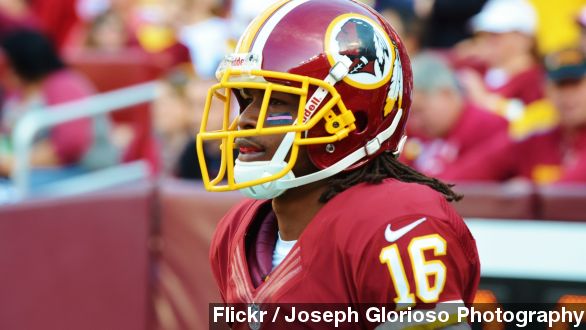 SMS
Does Patent Ruling Mean An End To The Redskins Name?

By Adam Falk
June 18, 2014
The U.S. Patent and Trademark Office has canceled the Washington Redskins trademark, calling it "disparaging." But will the team change its name?
SHOW TRANSCRIPT

The U.S. Patent and Trademark Office has canceled the Washington Redskins trademark — calling it disparaging.

The ruling came from the Trademark Trial and Appeal Board on Blackhorse v. Pro-Football Inc., a case filed on behalf of five Native Americans in 2006. (Via U.S. Patent and Trademark Office)

It cites a "near complete drop-off" in usage of the term in reference to Native Americans since the 1960s. "At a minimum, approximately thirty percent of Native Americans found the term REDSKINS used in connection with respondent's services to be disparaging at all times." (Via U.S. Patent and Trademark Office)​

That's about 1 in 3 Native Americans who find the team's name offensive. While the board also acknowledged there are dissenting voices within the Native American community, it says, "Once a substantial composite has been found, the mere existence of differing opinions cannot change the conclusion." (Via Flickr /  Joseph Glorioso Photography, U.S. Patent and Trademark Office)

The decision was first reported by ThinkProgress, which quotes Amanda Blackhorse, the plaintiff in the case. She said, "I hope this ruling brings us a step closer to that inevitable day when the name of the Washington football team will be changed."

While Washington's owner Dan Snyder wrote a letter saying, "It is a symbol of everything we stand for: strength, courage, pride and respect." (Via ESPN)

Demonstrators gathered outside stadiums to protest the name. (Via YouTube / US Freedom Club)​

Sports writers weighed in on both sides. (Via ESPN)

Even president Obama got involved, suggesting the team think about changing its name.

But so far, nothing has changed. The NFL's senior vice president of law and labor policy told ESPN last month:

A group of senators disagrees. Last month, they sent a letter to the NFL asking for a name change. (Via The New York Times)

Sen. Harry Reid was among the group that signed it. "For far too long the NFL has been sitting on its hands doing nothing while an entire population of Americans has been denigrated." (Via CBS)

​The team has since issued a statement saying it will appeal the ruling and the evidence presented "does not support cancellation."

Of course, should this potential appeal fail, the team might need to switch things up, and not just because the name has been ruled disparaging. (Via Flickr / Joseph Glorioso Photography​)

Deadspin writes no trademark means anyone could use the team's logo and start selling Redskins gear. "If money talks, a trademark cancellation shouts."

That said, in the past Snyder has held fast to his position on not changing the name despite opposition.