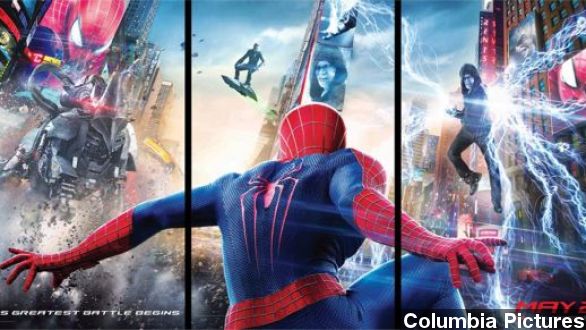 ​Need a daily dose of superhero news? You’re in luck: Sony has released the trailer for “The Amazing Spider-Man 2."

"Every day, I wake up knowing the more people I try to save, the more enemies I make."

"Soon everyone will know what it feels like to live in a world without Spider-Man." (Via Sony / "The Amazing Spider-Man 2")

The film brings back Andrew Garfield as Peter Parker/Spider-Man and Emma Stone as Gwen Stacy. (Via Sony / "The Amazing Spider-Man")

And judging by its posters, this movie will have no shortage of villains, including a rebooted Green Goblin, Jamie Foxx’s Electro and Paul Giamatti's Rhino. There are even rumored appearances from Doctor Octopus and Vulture, which has led many to speculate this movie will shift focus from the hero to the villains.

ScreenCrave notes that this could be good for the franchise after a less-than-impressive first installment rebooting an origin story when the original trilogy wasn't even a decade old.

But with the trailer and poster being released so far ahead of the movie's premiere, Forbes asks, is this too much?

They wonder if Sony gave too much away with this first wave of movie marketing, noting the villain surplus could have been a fun surprise for most viewers.