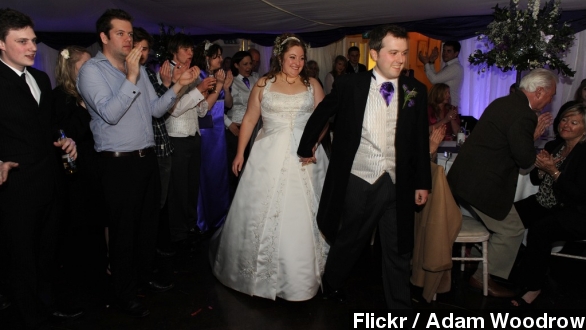 By Katherine Biek
August 20, 2014
A new study found couples who had at least 150 guests at their weddings were more likely to report being happy in their marriages.
SHOW TRANSCRIPT

Could the number of guests at your wedding directly correlate with your marital happiness as the years go by?

A new report from the National Marriage Project at the University of Virginia suggests it does.

Over a five-year period, the study followed 418 people who got married — the overwhelming majority in formal wedding ceremonies. Forty-seven percent of those who had at least 150 guests at their weddings reported marital happiness in the top 40 percent of the sample.

A writer for the New York Post came up with a point that might lend some credibility to the larger-weddings-equals-happier-marriage thing.

"It may be that having all those people at your wedding is a sign you have a large, extended network of family and friends who'll support you in your marriage — people you can turn to in times of tensions with your spouse."

Now before all you brides and grooms freak out and decide you need to add a bunch of people to your guest lists, a writer for Refinery29 pointed out some potential flaws in the findings.

First, the happiness factor was entirely based on what the couples told the researchers. And second, the couples have only been married for five years at the most because that's how long participants were followed. It's also important to note researchers only studied people between the ages of 18 and 40 and only couples who married someone of the opposite sex.

The Washington Post came to this conclusion after taking a look at the study: "Don't drive yourself deeply into debt with a gigantic wedding just because of a couple of bar charts."

We decided to take a look at factors others believe contribute to long, successful marriages.

A doctor of psychology says relationships take communication, honesty and compromise to work.

And in a post written for a site dedicated to marriage, a couples mediator advises people to pick their battles with their spouses and says it's all right to disagree, but it doesn't have to turn into a full-blown argument.

To read more about the study, head over to the National Marriage Project's website.