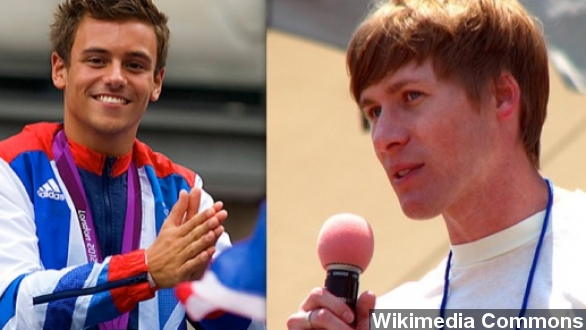 British Olympic diver Tom Daley made headlines when he came out in a YouTube video Monday.

"Of course I still fancy girls, but right now I'm dating a guy and I couldn't be happier. I just feel safe. And it just really does feel right." (Via YouTube / Tom Daley)

But no one knew who the lucky guy was — until now.

Quite the age difference! But the two do seem to have some things in common.

Black has said before that he came out in his late teens during his senior year of high school, around the same age Daley is now. (Via YouTube / Human Rights Campaign)

Black told The Bay Area Reporter back in 2008, "I became intensely shy, I had thoughts of suicide. I was a pretty dark kid, because I had an acute awareness of my sexuality, and was absolutely convinced that I was wrong."

​​Black is probably best known for his Oscar-winning screenplay for the 2008 biopic "Milk" about the iconic gay rights activist and politician Harvey Milk. (Via Universal Pictures / "Milk")

But in recent years, he's become an LGBT rights activist himself. Most recently, he's spoken out about Russia's anti-gay laws and called for Hollywood to take action. (Via NBC)

Sources say Daley and Black met earlier this year, but the two were first spotted together back in October at a coffee shop in Hollywood. (Via Daily Mail)

Daley received a wave of support after his video was posted and has gotten heartwarming messages from the likes of Russell Brand and Boy George. (Via Twitter / @rustyrockets, Twitter / @BoyGeorge)

Reps for both Daley and Black reportedly haven't responded to requests for comment.