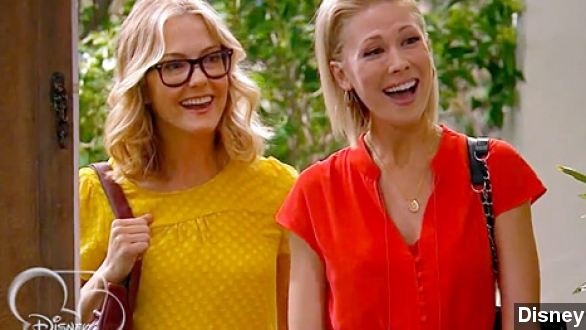 Sunday was a big day for same-sex couples on TV. On CBS, several were married live during the Grammys. And on the Disney Channel, this happened:

SUSAN: "Amy, this is Taylor's other mom, Cheryl." (Via Disney)

In what E! calls "a 'Modern Family' makeover" for Disney, a lesbian couple was introduced as a secondary storyline on family sitcom "Good Luck Charlie."

Disney announced the decision to include a same-sex couple in the show last June. A spokesperson told TV Guide the storyline was "developed to be relevant to kids and families around the world."

Desi Lydic, who portrayed one of the moms, has been tweeting her thanks to supporters since the episode aired. She says, "I'm so proud to be part of that episode! Go Disney!" (Via Twitter / Desi Lydic)

Most reactions have been positive and supportive of Disney, but others are a little more critical.

Conservative group One Million Moms posted this statement before the episode aired: "Disney should stick to entertaining instead of pushing an agenda. Conservative families need to urge Disney to exclude confusing topics that children are far too young to comprehend."

But going in the other direction, a Jezebel writer says, "It's strange in this day and age to see lesbian parents treated as a little exotic."

The sitcom "Good Luck Charlie" is in its fourth and final season.