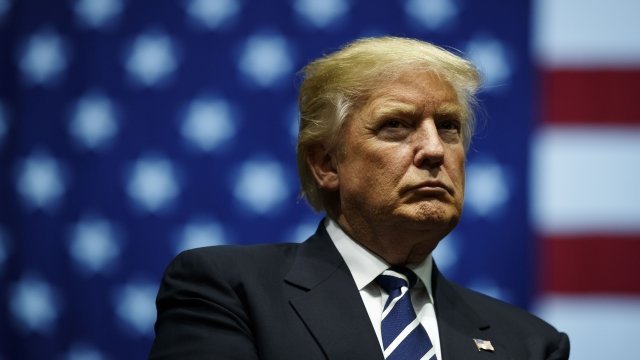 Near the end of the fight to confirm Supreme Court nominee Brett Kavanaugh, President Donald Trump weighed in on the protesters fighting his confirmation.

The president said: "The very rude elevator screamers are paid professionals only looking to make Senators look bad. Don't fall for it! Also, look at all of the professionally made identical signs. Paid for by Soros and others. These are not signs made in the basement from love! #Troublemakers"

That garnered a lot of dismissive responses.

"On Friday, President Trump falsely claimed protesters were not motivated by their concerns, but by paychecks," Mika Brzezinski said on MSNBC.

OK. We should fact-check this, but split it up into two parts. First, the claim that the protesters against Brett Kavanaugh were paid: Some of them were. But that doesn't mean their anger, or the reasons behind it, are any less genuine.

For instance, Vice News profiled a woman who helped organize protesters and guided them on where to go to confront senators. You likely saw the results of her labor in the form of viral moments. That woman works for an advocacy group called UltraViolet. And yes, she gets a paycheck.

But that's not all protesters. There were plenty of stories of ordinary people who showed up on Capitol Hill to protest out of passion. Some people sounding off against Kavanaugh got money from activist groups to use as bail if they get arrested. If they don't get arrested, they have to give the money back. It's called post-and-forfeit. The Washington Post published a piece explaining it after the president's tweet.

Second, the president's suggestion that George Soros was involved. His tweet implies the financier was directly paying protesters. That's not true. And there's not even evidence of indirect payments.

According to The Washington Post, Soros' foundations have given to at least one group that was supporting protesters against Kavanaugh. But according to that group, Soros' money isn't used for protests, even in the form of post-and-forfeit stipends.

In the end, a lot of protesters aren't collecting a paycheck for what they're doing. Even if they were, it doesn't mean they don't believe in what they're saying. And the notion that George Soros is funding them is not supported at all.