Did Andrew Gillum Refuse Help To Get Power On After Hurricane Hermine? 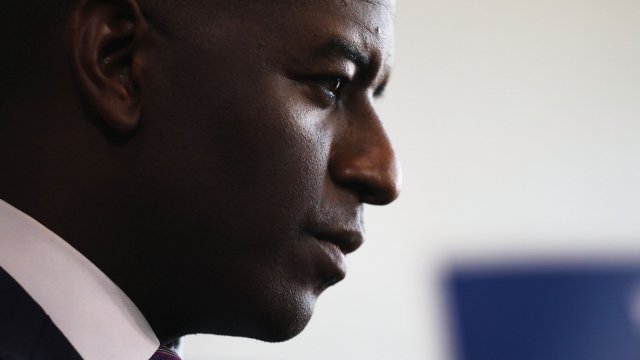 SMS
Did Andrew Gillum Refuse Help To Get Power On After Hurricane Hermine?

By James Packard
October 19, 2018
A Republican party ad claims Gillum turned utility workers away when they offered to help recover after the storm. That could use some context.
SHOW TRANSCRIPT

We're closing in on election day, and in Florida that means the possibility of electing the state's first black governor.

Democrat and Tallahassee Mayor Andrew Gillum is facing Republican former U.S. Rep. Ron DeSantis in a bid for the office.

The Republican party is going after Gillum for his mayoral record.

"After the hurricane, we had no electricity for over a week," a woman said in a Republican party ad. "Utility companies lined up trucks to restore power. But as mayor, Andrew Gillum refused help from workers. The trucks just sat while people suffered."

After Hurricane Hermine in 2016, thousands of people in Florida's Panhandle lost power. Florida Power and Light, or FPL, offered to help get the lights back on.

Tallahassee's general manager of utilities at the time reportedly thought the city already had enough help and didn't want to create unsafe conditions by saturating the area with workers. So, he didn't jump on FPL's offer. A city spokesperson who talked to Politifact backed that up, saying the city had already accepted all the help it could safely utilize.

Officials at the time told Politifact that, ultimately, the decision of whether or not to accept more help fell to the utilities manager, not the mayor.

Regardless, city and state officials got plenty of criticism for how they handled power restoration after Hermine. Republicans argue Gillum bears some responsibility because he didn't speak up. But others have countered, saying he approved an agreement already in place. Shortly after the storm, Gillum defended officials' response.

Whether the situation was properly handled or not, it's important to understand the context. Suggesting Gillum single-handedly refused help from utility companies is misleading, and the ad attacking Gillum leaves an inaccurate impression.