DHS Investigates FEMA Administrator Over Use Of Official Cars 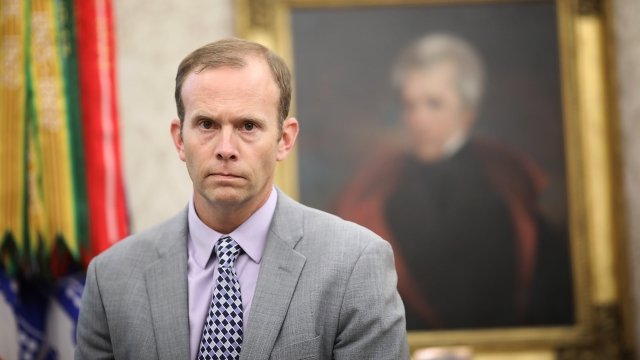 SMS
DHS Investigates FEMA Administrator Over Use Of Official Cars

By Sebastián Martínez Valdivia
September 13, 2018
The investigation centers on whether Administrator Brock Long used official vehicles without authorization on trips to his home in North Carolina.
SHOW TRANSCRIPT

As FEMA prepares for Hurricane Florence to make landfall, the man in charge of coordinating its response is under investigation.

The Department of Homeland Security is reportedly investigating whether FEMA Administrator Brock Long inappropriately used agency cars on trips to his home in North Carolina.

Administration officials told Politico that Long's frequent trips home brought him into conflict with his boss, Secretary of Homeland Security Kirstjen Nielsen. The Politico report says the investigation was triggered by an accident involving one of the cars.

Long responded to the reports Thursday morning. "We'll continue to fully cooperate with any investigation that goes on, and own up to any mistakes," he said.

FEMA had already been in the news recently after an investigation into the federal response to Hurricane Maria last year found thousands more people died than originally reported.