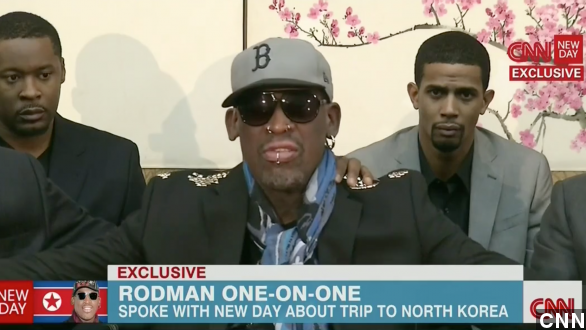 Former NBA star Dennis Rodman has checked into rehab less than a week after returning home from North Korea.

Rodman's agent confirmed the news to the media Saturday. NBC reports Rodman is now undergoing treatment for alcoholism at an undisclosed location.

Rodman became the center of attention earlier this month when he, and several other former NBA players, made a trip to North Korea for an exhibition game to celebrate dictator Kim Jong Un's birthday. (Via CBS)

Then there was this outburst during an interview with CNN's Chris Cuomo as they discussed the imprisonment of American missionary Kenneth Bae.

RODMAN: "Do you understand what he did in this country? ... I don't give a rat's ass what the hell you think. I'm saying to you, look at these guys here. Look at them."

Bae's family was outraged by "The Worm's" comments. ABC notes Rodman later apologized for his behavior and admitted he had been drinking before that interview.

This stint in rehab is not Rodman's first attempt at beating alcoholism.

TMZ reports Rodman tried beating the illness back in 2008 but wasn't successful. He also appeared on the third season of VH1's "Celebrity Rehab" in 2009 and reportedly relapsed around the same time the show aired.

Rodman is expected to be in treatment for about a month.