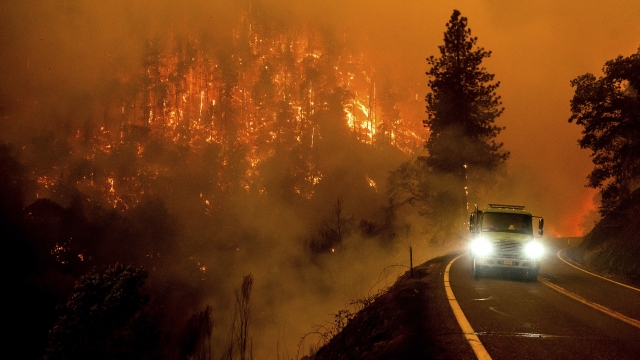 A raging wildfire along the California-Oregon state line is forcing evacuations, as scorching hot temperatures, and vicious winds, continue to stoke the flames of the fast-moving McKinney fire.

And across the country, in Montana, the Elmo wildfire has exploded to more than 11 square miles, as the National Weather Service warns temperatures in the area could spike to near 100 degrees in the coming days.

And in Kentucky, at least 26 people have died in devastating flooding.

"Make sure you are in a safe place. I don't want to lose one more person," warned Gov. Andy Beshear.

These extreme weather events – possibly linked in part to climate change – continue to plague communities across the U.S., as Democrats in the senate reached a deal to pass the "Inflation Reduction Act."

A bill that would invest $369 billion in climate solutions and environmental justice.

Senate Democrats say the climate portion of the bill would reduce carbon emissions by around 40% by the year 2030 and put nearly $370 billion toward energy and climate change initiatives, including tax credits for people buying electric cars.

West Virginia Democratic Senator Joe Manchin almost killed the legislation off, but on Sunday he talked about the revised version that was agreed to last week.

"Now to have a piece of legislation—we have energy, and we have investments for new energy and basically, that's our responsibility. You can walk and chew gum—we have a balanced approach. These are solutions Americans want," said Sen. Manchin

Manchin told CBS' "Face the Nation" that the energy and climate deal he's now supporting will tackle inflation, while the majority of republicans fear the bill would add to inflation, which is currently running at a 40-year-high.

And when it comes to getting the new legislation passed, that hinges on a 'yes' vote from Democratic Senator Kyrsten Sinema—who has yet to commit, avoiding questions late last week – Manchin said Sunday he doesn't know if Sinema would vote for the bill, adding that "she should."

"I do think it will get the 10 Republicans we need to move forward," said Sen. Tammy Baldwin.

However, Republicans are expected to widely oppose the bill, but Democrats can still pass it through "reconciliation," which requires only a simple majority vote.

The legislation is expected to be voted on this week.