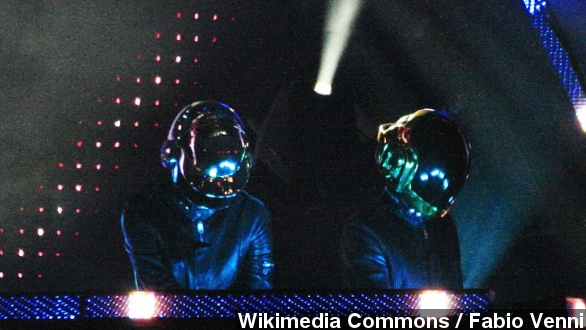 It was a "lucky" night Sunday at the Grammys for two robots.

Daft Punk stole the show and took home a total of five awards for every category the duo was nominated in. (Via The Recording Academy / CBS)

The group was up against some strong competition such as Macklemore & Ryan Lewis and Lorde, who all took home Grammys as well. (Via The Recording Academy / CBS)

In between their wins, performances from other artists including Metallica, Beyonce and Katy Perry might have rocked the Staples Center, but the big moment of the night was when Daft Punk took the stage.

In a rare gig, the French robots — alongside Pharrell Williams, Stevie Wonder and Nile Rodgers — performed a mashup of "Get Lucky," which won record of the year and best pop group performance. (Via The Recording Academy / CBS)

The duo told Rolling Stone there were never any plans to promote the album because they wanted to "focus everything on the act and excitement of listening to the album."

That didn’t stop the album from soaring to the top of the Billboard charts and selling more than 800,000 copies to date. (Via Columbia Records / Daft Punk, Variety)

And what did the robots have to say about the big night? Well, they decided to remain silent.

"On the behalf of the robots ... of course, they want to thank their families." (Via The Recording Academy / CBS)

Daft Punk won its first Grammys in 2009 for its album "Alive 2007" and the single "Harder Better Faster Stronger."