Daft Punk Grammys Set Will Be First Televised Gig Since 2008 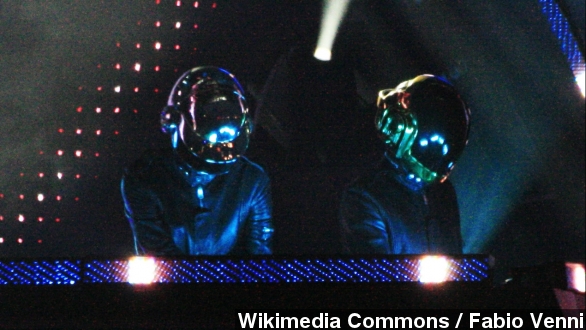 SMS
Daft Punk Grammys Set Will Be First Televised Gig Since 2008
By Laura Heck
By Laura Heck
December 19, 2013
French dance-music duo Daft Punk will perform live at the Grammys in the pair's first televised performance since the 2008 Grammys.
SHOW TRANSCRIPT

Elusive French duo Daft Punk will perform at the awards show — the pair's first live performance since the May release of its No. 1 album "Random Access Memories" and smash summer single "Get Lucky." (Via Daft Life / Daft Punk)

Daft Punk is nominated for five Grammys, including album of the year. The award show will be held Jan. 26. (Via Grammy.com)

Despite the acclaim, the dance duo has not performed anything from "Memories" live. Even more extreme, the pair hasn't made a televised performance since a 2008 Grammys appearance with Kanye West. (Via Wikimedia Commons / Fabio Venni, Flickr / Minyoung Choi)

Grammys Executive Producer Ken Ehrlich told Rolling Stone: "We learned that because they had such a good experience with us when they appeared with Kanye in 2008, they were happy to discuss a performance on this year's show ... and finally they agreed to be a part of this year's telecast."

Los Angeles Times writes, "While it's customary for all nominees in the (Best Album) category to perform at the Grammy Awards," no one really expected it from Daft Punk.

The pair still hasn't toured in support of its album and remains frustratingly insistent on an air of mystery. "Memories" collaborator Paul Williams thinks that's a good thing, though. (Via Wikimedia Commons / Bonsaichop)

"They disconnect who they are to allow you to experience what they create." (Via Daft Punk)

Fellow best-album nominee Kendrick Lamar announced via Twitter that he will also be taking the Grammy stage, along with other confirmed acts Pink, Fun singer Nate Ruess, Willie Nelson and Blake Shelton.