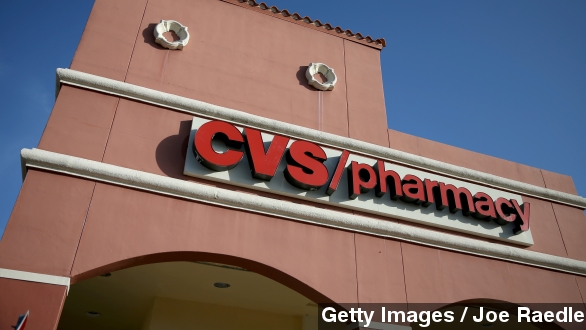 By Cliff Judy
September 3, 2014
CVS' name change to CVS Health also came with the announcement the company's plan to rid its shelves of all tobacco products came a month early.
SHOW TRANSCRIPT

The first three letters will stay the same, but CVS announced a name change it hopes customers will see as a major shift for the better.

CVS HEALTH COMMERCIAL: “The wish we wish above all for ourselves and for those we love is health, so we quit selling cigarettes in our CVS pharmacies.”

It had already announced in February it eventually planned to stop selling tobacco products — giving up about $2 billion annual sales. (Video via ABC)

But the name change announcement came with the revelation CVS managed to get cigarettes and other tobacco products off the shelves nearly a month before its Oct. 1 target date.

CEO Larry Merlo appeared on CNBC not long after Wednesday’s opening bell with a fairly predictable set of talking points.

MERLO: “We’re very proud of the decision that we made. Somebody had to be first to make that decision, and we’re proud to say that we were the first in the interests of our customers and our patients.”

CVS Health plans to use that space behind the counter for stop-smoking products and ads showcasing it has stopped selling tobacco.

Interestingly, the company does not plan to sell e-cigarettes because as Merlo told The Wall Street Journal, “We don't think it's consistent with everything that we've talked about.”