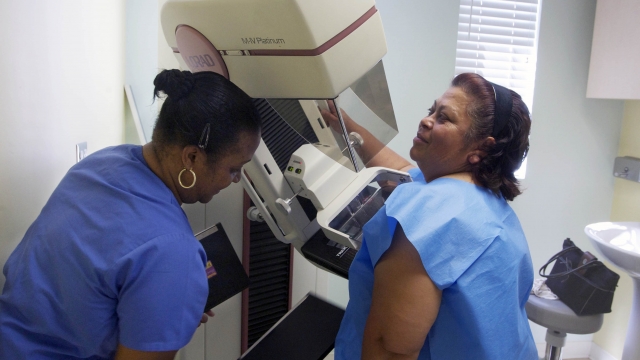 As the world marks the death of roughly one million people due to COVID-19, scientists say thousands more will die without ever contracting the virus. The reason? Its impact on cancer.

"That is a public health issue that we really want to try and address," Dr. Ned Sharpless, Director of the National Cancer Institute said.

Earlier this year, Sharpless and his team at the National Cancer Institute set out to measure the impact COVID-19 would have on cancer. What they found was an alarming projection indicating that an additional 10,000 people in the U.S. will die from breast and colon cancer due to COVID-19 over the next decade due to delays in screenings and treatment. That's not including the dozens of other cancers Sharpless says will also be impacted.

"When we made those assumptions back in March, we thought, wow, that that would be really excessive, that would be surprisingly bad. And it's turned out to be much worse," Sharpless said.

Sharpless says cancer diagnoses have dropped by 50 percent, but that the actual incidence of cancer has by no means declined that much, indicating a dangerous delay in intervention.

"For a disease like breast cancer, that's really important. Stage is the major determinant of outcome in breast cancer," Sharpless said.

According to Sharpless, some clinics in the U.S. have seen a 95 percent decline in mammography, which is the most common way of screening for breast cancer.

"It's tough for these screening programs to catch up with the screening of the women who had to have their processes delayed, because screening has to be done safely adhering to social distancing policies," Dr. Lisa Newman, Chief of Breast Surgery at the Weill Cornell Medicine-New York Presbyterian Hospital Network

Newman is one of the leading surgical breast oncologists in the U.S. She says these delays are extremely problematic for people of color.

"Medically under-served populations are going to be bearing the brunt of the downstream consequences of COVID," Newman said.

But screenings and treatment aren't the only aspects of cancer facing COVID-19 related delays.

"It's absolutely critical that we get research back on track," Newman said.

"So we tried to really be incredibly flexible and supportive of both the clinical and basic research engines during this period. But there are some challenges for sure," Sharpless said.

Meanwhile, organizations like SHARE, a national nonprofit that works to support and educate women affected by breast, ovarian and other cancers have had to pivot during this pandemic.

"Our helpline calls are lasting twice as long as they used to in the past, because women have so many things that are happening at the same time. I mean imagine a person who is in the middle of COVID getting a brand new diagnosis of breast cancer?" Carol Evans, CEO and Executive Director of SHARE.

"We really have to figure out a way to work on both problems. We can't just say we're going to shut down one to work on the other or you know, that one's more important than the other," Sharpless said.

As National Breast Cancer Awareness Month gets underway, SHARE says it is critical women check themselves for potential symptoms at home and communicate with their doctors, even if they can't get in right away.

"Reach out to the help lines, don't think of these organizations as just being city based. We're there for everyone," Evans said. "Don't be alone in this time."