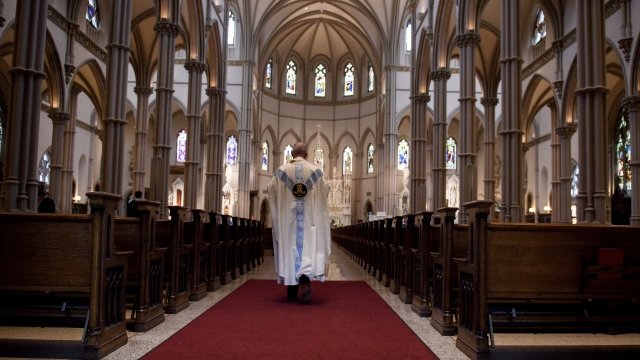 By Katherine Biek
December 4, 2018
That report said more than 300 Catholic priests in the state had been credibly accused of abusing more than 1,000 children over the past 60 years.
SHOW TRANSCRIPT

Pennyslvania's Supreme Court sided with 11 priests implicated in a grand jury report on clergy sex abuse — ruling Monday that their names must be kept secret.

That report released in August said more than 300 Catholic priests in Pennsylvania had been credibly accused of abusing more than 1,000 children over the past 60 years.

The majority of those 300 priests were named in the report, but these 11 were redacted because they'd already challenged the validity of the report in court.

In a 6-1 decision, the Supreme Court decided the priests' names should remain anonymous in an effort to not smear their reputations — something they noted is protected by the state Constitution.

"We acknowledge that this outcome may be unsatisfying to the public and to the victims of the abuse detailed in the report. While we understand and empathize with these perspectives, constitutional rights are of the highest order, and even alleged sexual abusers, or those abetting them, are guaranteed by our Commonwealth’s Constitution the right of due process," the court said in its majority opinion.

Following the ruling, Pennsylvania Attorney General Josh Shapiro called on the Catholic Church to name the 11 priests, pointing out that nothing in the court order prevents them from releasing that information.