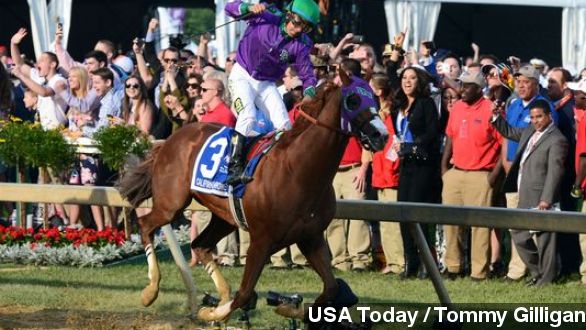 California Chrome is now but one win away from horse racing's ultimate title.

After a tremendous performance at the Preakness Saturday and a victory at the Kentucky Derby two weeks prior, California Chrome has a shot at becoming the first Triple Crown winner in 36 years. But now something threatens to keep the thoroughbred out of the Crown's last leg. (Via Los Angeles Times ) (Via NBC) (Via Los Angeles Times)

Trainer Art Sherman has suggested California Chrome might abandon his Triple Crown bid if New York racing officials do not allow him to wear a nasal strip at the Belmont Stakes.

SBNation explains: ​"California Chrome has worn a Flair Equine Nasal Strip during his current six-race winning streak, but horses at the Belmont are not allowed to wear one."

Sherman told USA Today Sunday morning the horse's owner might not permit the colt run without it.

"This guy Perry Martin, he might not run if they say you can't run with a nasal strip. He's very funny about things like that ... I don't know why they would ban you from wearing one. But we'll have to cross that bridge when we get there I guess."

According to Flair Strips' website, Nasal strips for horses, like humans, assist breathing and can "help prevent fatigue related injuries, [and] ... protect the lungs from injury and bleeding."

I'll Have Another, the last horse to win both the Derby and Preakness, also wore nasal strips. In 2012, New York racing officials told his handlers the horse would not be allowed to wear it during the Belmont. (Via The New York Racing Association)

They were preparing to race anyway until the colt's Triple Crown bid was dashed by a leg injury the day before the race. (Via The New York Times)

The Wall Street Journal explains: ​"Since 1979, there have been 13 horses to win the Derby-Preakness double but all faltered (or scratched) in the Belmont."

So could California Chrome really not be allowed to run for the prestigious Triple Crown over nasal strips? Sherman says he can't make that call: "I'd have to leave it up to the owners. But I know they'll be upset." (Via Horse Racing Nation)

Sherman will talk to New York racing officials about allowing California Chrome to wear the strip. The Belmont Stakes are slated for June 7.