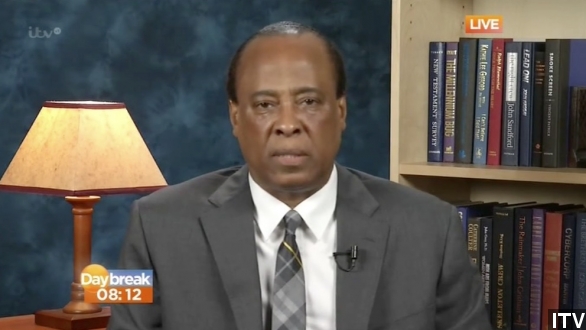 By Lauren Zima
November 25, 2013
In his first interviews since being released from jail in October, the pop star&#039;s former doctor gives sad, intimate details of his last days.
SHOW TRANSCRIPT

Conrad Murray has given his first interviews since leaving jail in October.

"I did not kill Michael Jackson." (Via ITV)

Murray continues to assert his innocence in interviews with the Daily Mail, ITV and Australia's "60 Minutes." But that's nothing new, even though in 2011, he was convicted of involuntary manslaughter in Jackson's 2009 death.

What is new in these interviews are the intimate details, true or not, that Murray is providing about the pop star. Listening to what he says feels intrusive. (Via Sony Entertainment / Michael Jackson)

Murray also tells the Daily Mail Jackson's room smelled because he was so private he wouldn't let maids in to clean...

...and says, "You want to know how close we were? I held his penis every night to fit a catheter because he was incontinent at night." He also says Jackson did not know how to put on condoms, so he did it for the pop star.

Again — intrusive, and sad. But to Murray it all seems important. He says he loved Jackson like a brother, that he dreams of the pop star, that he wants to right a wrong — he wants his medical license back. (Via CNN)

Murray even says he's felt Jackson's touch since his death, and the feeling drove him to tears.

One thing he wouldn't get into — whether Jackson was a pedophile. He told "60 Minutes" in Australia he wasn't prepared to answer the question. (Via Radar Online)

According to Murray, Jackson called himself "clairvoyant" and predicted that their names would forever be intertwined. Unfortunately, that much has come true. As for Murray's next step, he is currently appealing his conviction in Jackson's death.