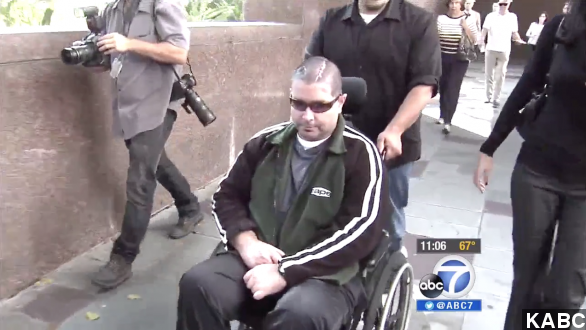 By Cliff Judy
July 10, 2014
Bryan Stow received $18 million after a jury held the Los Angeles Dodgers liable for the beating that nearly killed him on Opening Day 2011.
SHOW TRANSCRIPT

And in a nutshell, the jury blamed the Dodgers for the environment leading up to the beating. Stow's attorney had argued beer sales were through the roof. That, coupled with not enough police or security guards.

CARLOS MUÑOZ, JUROR: "If you're going to own a stadium, do it right."

The jury found while Stow had been drinking, he was not liable and security guards assigned to the parking lot where he was attacked didn't arrive until well after it happened. (Via KCBS)

While the jury decided then-owner Frank McCourt wasn't liable and the Dodgers only partially responsible, jurors still laid the vast majority of settlement money on the baseball team.

KTLA reports over the course of four weeks of testimony and nine days of jury deliberations that at one point appeared hopelessly deadlocked, jurors even made a secret trip to Dodger Stadium.

ALEX VALDEZ, JUROR: "One of the expert witnesses, they started talking about life expectancy. Some said, 'Yeah, 10 years.' I felt something inside of me. I really felt for the family." (Via KTLA)

Los Angeles Times noted over the last month-and-a-half, 45-year-old Stow "often forgot why his parents were absent from their Capitola, Calif., home and asked when they planned to return."

The Dodgers' attorney was quoted on several local TV stations saying multiple times essentially the team disagreed with, but respected the jury's decision — suggesting reporters asked multiple times if the team was frustrated.

Forbes notes the Dodgers could obviously appeal the case, presumably furthering a nightmarish PR situation for the team. But if they don't, the $13.9 million portion the team is responsible for is tax deductible.

Both of Stow's attackers pleaded guilty earlier this year. A judge who called the two "complete cowards" sentenced the man on the right, Marvin Norwood, to four years in prison and Louie Sanchez to eight years in prison. (Via Getty Images)