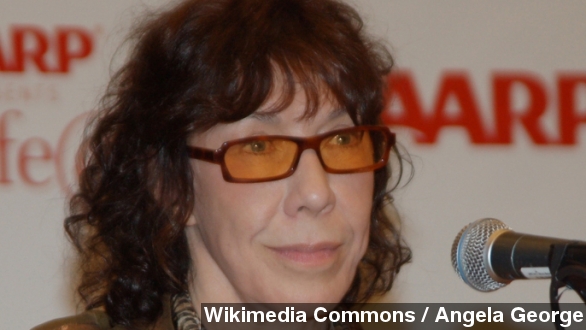 After more than 40 years together, comedian Lily Tomlin and her partner, comedy writer Jane Wagner, are officially hitched.

Tomlin's rep confirmed to People magazine Tuesday the two tied the knot during a private ceremony in Los Angeles on New Year's Eve. She added, "They're very happy."

News of Tomlin and Wagner's nuptials first surfaced when Chicago Tribune Arts & Entertainment writer Liz Smith, who is a friend of the couple, let it slip in an article published last week. (Via YouTube / americajr)

She wrote, "And my longtime friends, Lily Tomlin and her love, the writer Jane Wagner, got married on the eve of 2014. ... My wish is that their happiness will be as great as their combined talents." (Via Chicago Tribune)

Tomlin did drop a few hints back in August that she and Wagner might be hearing wedding bells in the near future.

The comedian told E!, "We're thinking maybe we'll get married... You don't really need to get married, but marriage is awfully nice."

Seventy-four-year-old Tomlin and 78-year-old Wagner reportedly met back in 1971 to collaborate for Tomlin's comedy album, "This Is a Recording." (Via CBS / "The Late Late Show with Craig Ferguson")

Congratulations to the happy couple!