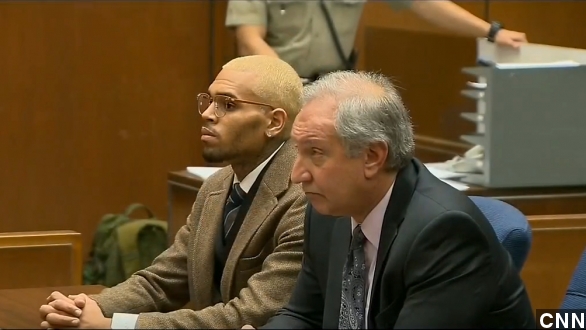 Chris Brown had his probation revoked by a Los Angeles County Superior Court judge Monday, but it seems the R&B star is once again back in good graces.

"Chris Brown will not be going to jail." (Via CNN)

"Chris Brown will not be going to jail" (Via WRTV)

Back in October, Brown was arrested for allegedly fighting outside of a D.C. hotel. The charge in that case was reduced to a misdemeanor, but it was enough to convince an L.A. judge to revoke Brown's probation Monday. (Via WUSA)

That probation was the only thing that kept Brown out of jail in 2009 when he assaulted his then girlfriend Rihanna on the eve of the Grammy's. (Via ABC)

So why no jail time for Brown? Well, It seems Brown has made some changes while in rehab.

E! quotes a report from the probation facility that says, "[Brown] made improvements and positive behavior change in the program ... [Brown] appears to have a more serious and responsible demeanor and is responding well ... "

This court-ordered stint in rehab follows a voluntary stay which ... let's say could have gone better.

"He got kicked out of the facility for an anger problem. His mom showed up for some therapy sessions."

"He threw a rock through his mom's windshield because that is a ticket out apparently." (Via TMZ)

But Brown could still go to jail. Alan Duke writes for CNN, the L.A. judge handling Brown's case, "will decide in February if he will order Brown to complete his sentence in prison instead of probation."

Brown is not allowed to leave California except to go to court in Washington D.C. in January.