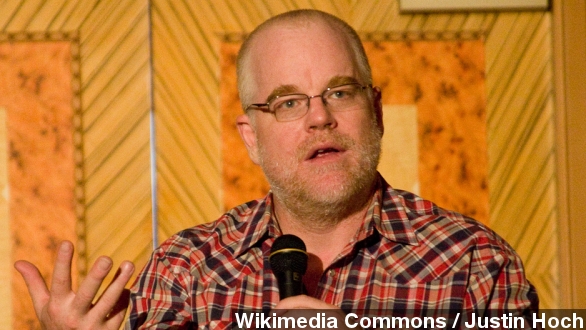 The news of actor Philip Seymour Hoffman's death Sunday was completely unexpected, so it's no surprise to see the actors who worked with and looked up to Hoffman expressing their shock and sadness on Twitter.

Sam Claflin, who was working with Hoffman on The Hunger Games franchise, called the late actor "A truly wonderful man, with a magical touch." And Clifton Collins, Jr, who co-starred with Hoffman in "Capote," for which Hoffman won an Oscar, shared an Instagram photo of the two of them together and wrote, "The lessons and love shared with this man I'll carry til the end of my days."

Fellow actors Ricky Gervais and Steve Martin both praised Hoffman, with Gervais calling him "One of the greatest actors of a generation and a sweet, funny & humble man," and Martin lauding his performance in Death of a Salesman.

In fact, praise for Hoffman's performances as well as his acting gifts in general has flooded out of Hollywood since the news broke.

Mia Farrow, Justin Timberlake, Ellen Degeneres, Will Ferrell and literally dozens of other actors and entertainers wrote about Hoffman's immense talent and what it meant to them.

Hollywood Life sums up the reaction: "Philip was one of the most celebrated actors of his generation ... He was called an 'actor's actor' and drew rave reviews for pretty much everything he ever did, so it’s no surprise that Hollywood is in mourning."

But there was also an element of frustration in some stars' reactions. Early reports on Hoffman's death suggest it was due to a drug overdose.

A number of celebrities wrote about the power of addiction to destroy lives. Lena Dunham wrote "We have lost so much joy to something so joyless," Evan Rachel Wood writing "Losing him this way is absolutely tragic," and Richard Lewis prompting readers "Please take away from this horror to get help if you need it."

Hoffman worked on both the big and small screens and on stage since the early 90's. He was known for powerful performances of flawed and complex characters, not always playing the good guy. He was 46.