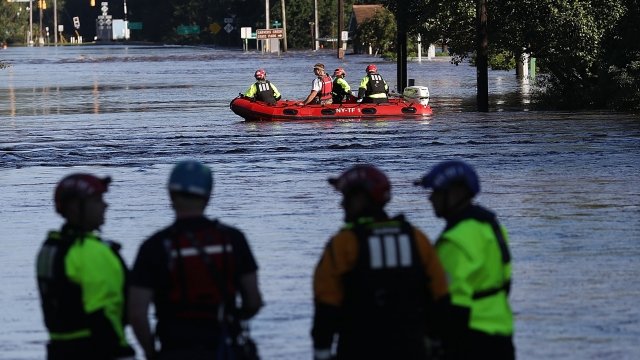 SMS
Florence's Death Toll Rises As Floods Threaten Carolinas
By Audrey Esther
By Audrey Esther
September 18, 2018
Many residents in Fayetteville, North Carolina, are "in harm's way," because of the flooded Cape Fear River, according to city officials.
SHOW TRANSCRIPT

Florence may have moved out of the area, but massive flooding remains a real concern throughout the Carolinas.

Thousands of residents in Fayetteville, North Carolina, are "in harm's way," according to city officials, because of the Cape Fear River. It's currently at more than 60 feet and expected to crest sometime on Wednesday.

The river's overflow also turned Interstate 40 in Pender County into a river, which state Department of Transportation officials say serves as a reminder of how dangerous traveling in the area can be.

In South Carolina, more than 200 roads, including dozens of major ones, are closed because of flooding.

As of Tuesday evening, the storm had been blamed for at least 35 deaths.