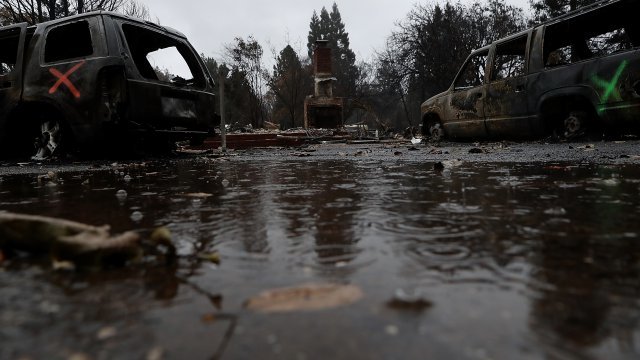 More rain is in the forecast for parts of California Friday morning.

This comes after heavy rain Thursday caused flash flooding and mudslides in areas ravaged by wildfires this year. The National Weather Service said a thunderstorm in Northern California dumped 1.5 inches of water in just one hour. And swift-water rescue teams rescued a number of people from their homes, trees and vehicles.

The rain prompted authorities to issue mandatory evacuations in areas affected by the Camp, Woolsey and other wildfires.

Burned ground is less permeable, so water flows more freely off the surface, increasing the chances of flooding, which in turn can spread dangerous debris.

Search crews finished looking for victims in the northern town of Paradise Thursday. It was incinerated by the Camp Fire, which scorched more than 153,000 acres and killed at least 88 people before being fully contained.

Officials reportedly expected to reopen Paradise to survivors next week, but as of Friday morning it's now unclear if the recent flash flooding will delay that timing.