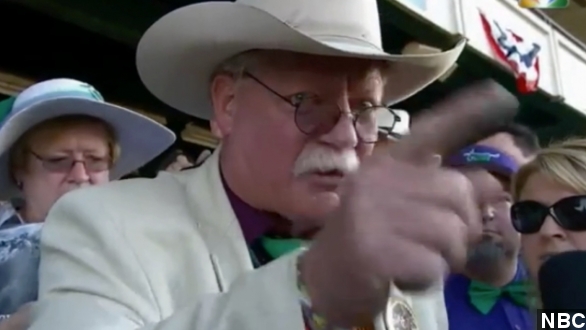 One day after California Chrome came in fourth place at Belmont, missing his chance at a Triple Crown, co-owner Steve Coburn is standing by his controversial post-race statement.

"Do you regret what you had to say?"

California Chrome took the win at both the Kentucky Derby and the Preakness and went into Saturday's Belmont race looking to be the first horse to win the Triple Crown since 1978.  (Via KTNV)

But, at Belmont, Chrome was only one of three other horses to run in all three races and Coburn let others know how he felt about this format.

"These other horses, they always set them out ... I look at it this way, if you can't make enough points to get into the Kentucky Derby, you can't run the other two races... This is a coward's way out... Our horse had a target on his back."  (Via NBC)

So basically he wants the rules changed, "so that horses have to run in all three of the triple crown races. So it's all an even playing field. None of the horse that finished ahead of California Chrome raced in the Kentucky Derby and the Preakness." (Via HLN)

After that rant Coburn's wife seemed a bit distraught telling him to stop, he then turns around and says "well I don't care." (Via Twitter / @juliatherosee)

And it looks like that's true. Still, many other outlets are calling him a sore loser. (Via Los Angeles Daily News)