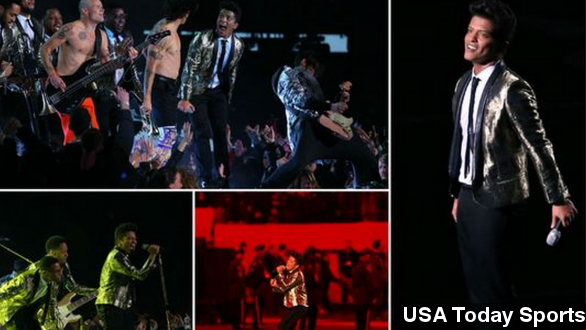 More than 100 million viewers tuned in to watch the Seattle Seahawks take on the Denver Broncos in Super Bowl XLVIII, and while the game itself didn't provide much entertainment, most critics agree Bruno Mars' halftime show did.

From a drum solo to a James Brown throwback dance move to a collaboration song with the Red Hot Chili Peppers, Mars wowed all with a dynamic performance HLN says may have been better than the game.

A Rolling Stone review of Mars' performance called him an "electric showman" and "old-school vocal powerhouse" who triggered "happy nostalgia" with his wide-ranging show.

A writer for the New York Daily News follows that thought, explaining Mars represented "a virtual pop nexus" of the past 40 years of music — "touching on bouncy '60s Motown, fun '70s disco funk, slick '80s pop and a hint of modern hip-hop-flash."

And Mars' performance didn't just light up the stage. It lit up the Twitterverse too.

Mars and the Red Hot Chili Peppers generated about 2 million tweets during the 12-minute show, and as of Monday morning, Mars was still trending. (Via Twitter)

But Mars didn't please everyone. Two bloggers for USA Today Sports called the show the most forgettable since Tom Petty and The Who, writing: "Until the appearance by the always-game Red Hot Chili Peppers, the show felt like a snooze. It belonged at the People’s Choice Awards, not on the Super Bowl stage."

And a writer for The Guardian went so far as to call Mars as "dull" as the football game itself, which if you didn't know, was a 43-8 blowout by the Seahawks. That's the third largest margin of victory in Super Bowl history.

Dull or electrifying, Mars joins an elite group of Super Bowl performers which includes Beyonce, Michael Jackson, Madonna and the Beatles. These stars often see a major bump in album sales following a Super Bowl performance, which could only mean good things for Bruno, who's sold more than 115 million singles worldwide.