Brian Back From The Dead On 'Family Guy' 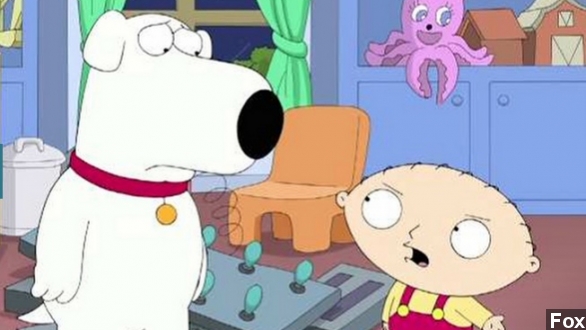 SMS
Brian Back From The Dead On 'Family Guy'

By Lauren Zima
December 16, 2013
Brian the dog returned to "Family Guy" Sunday night. Find out how, and get reactions.
SHOW TRANSCRIPT

Brian the dog is back on 'Family Guy.'

Yes, Sunday night, Stewie came back from the future and saved Brian's life.

A few weeks back, Brian was killed by a car — shocking fans. (Via NY Daily News)

And leading to major outcry and protests. (Via Los Angeles Times)

But future episode descriptions hinted he could return, and Sunday night, the dog was undead. (Via Rolling Stone)

Creator Seth MacFarlane first tweeted a sweet message about the importance of appreciating the ones you love.

But that was followed by this message to fans. We'll just let you read it.

A writer for Newsday says fans never should've taken Brian's death seriously, and that bringing him back was easy.

And the A.V. Club says, was all this a move for ratings? Yes. But, at least "Family Guy" tried something different.

Yeah, killing a character. Really different. Or not so different if you saw a certain season finale Sunday night. But that's another story.