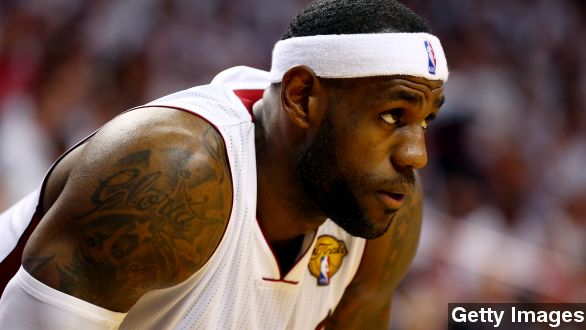 By Jamal Andress
July 13, 2014
Now that LeBron James is officially coming home, the content of his new contract, like everything else, is under the microscope.
SHOW TRANSCRIPT

Now that LeBron James is officially coming home, the content of his new contract, like everything else, is under the microscope. (Via Getty Images)

According to ESPN, LeBron James has signed a two-year deal with the Cleveland Cavaliers for $42 million. He also retains the ability to opt-out of his two-year contract after next season. (Via Getty Images)

But wait! What about the letter? What about finishing his career in Cleveland? What about inspiring kids in Northeast Ohio? 'Decision 3' 2015?!

Not exactly, according to Brian Windhorst of ESPN this contract has nothing to do with leaving Cleveland.

"He structured this deal in such a way that he can sign another deal in 2016 and potentially make a lot more money long term. ... It was made very clear his intention is to remain with the Cavaliers long term."

And it seems the sports world doesn't doubt James' intentions with CBS writing, "James wouldn't dare leave Cleveland" and USA Today adding, "this is a business decision and not an opportunity for James to test free agency again."

Windhorst goes on to say, the new max contract for James in 2016 could be worth upwards of $80 million based on a new TV deal expected for that same year.

"Welcome to Inside the NBA"

The 2015-2016 season will close out an eight-year $7.5 billion deal between ESPN, Turner Sports and the NBA. At which time, Adam Silver and his seven advisors will need to negotiate a new broadcasting contract — one that will undoubtedly be worth more money. (Via Getty Images)

The NBA Finals continues to draw in more eyeballs year after year and the 2014 NBA draft was the most watched NBA Draft in 19 years.

And more money for the NBA likely means more money for its brightest star. James does risk potentially losing money if for some reason he's not the electric, likable and dominant NBA All-Star in 2016 that he is today. (Via Getty Images)

But if you're going to gamble why not gamble on yourself? Especially if you're LeBron James.