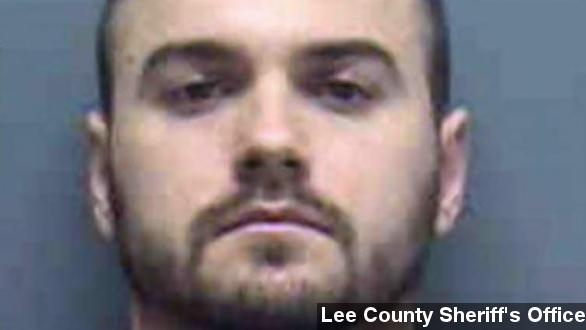 By Briana Koeneman
January 2, 2014
The fan who won a chance to watch the "Breaking Bad" series finale with the show's stars was arrested on drug charges.
SHOW TRANSCRIPT

Looks like luck has run out for the fan who won a contest to watch the "Breaking Bad" series finale with the show's stars.

"Listen to this. This man, Ryan Lee Carroll, back in the headlines, arrested for a drug raid on Tuesday. In September, he appeared right here on ABC 7. He won a nationwide contest sponsored by 'Breaking Bad.'" (Via WZVN)

That's right, a drug bust. The kind of drugs Carroll had in his possession is unclear, but it still kind of sounds like a scene ripped straight out of the show's script. (Via AMC / "Breaking Bad")

Twenty-eight-year-old Carroll was arrested on felony charges of possession of a synthetic narcotic and possession of a controlled substance without a prescription. (Via New York Daily News)

He was also reportedly slapped with a misdemeanor charge for keeping a shop or vehicle for dangerous drugs.

Police say they began a criminal investigation at Carroll's home Tuesday morning. Two other men were also reportedly taken into custody and received charges similar to Carroll's after the bust. (Via WBBH)

Carroll made headlines for the first time after he won the "Breaking Bad" contest sponsored by Aaron Paul, who played Jesse Pinkman on the hit series.

Paul set up the contest to benefit The Kind Campaign, an anti-bullying nonprofit founded by his wife. (Via Omaze.com)

Anyone who donated to the charity was entered into a raffle to win the grand prize — a trip to the Hollywood Forever Cemetery to watch the show's finale and party with Paul, Bryan Cranston and the rest of the "Breaking Bad" cast. (Via TBS / "Conan")

After winning the once-in-a-lifetime trip, Carroll told Naples News, "If you start watching [the show], you can’t stop. It’s highly addicting, just like the meth they make.”

Jailhouse records say Carroll is now being held on more than $12,000 bond.