Brain Freeze: Concussions In The NFL May Be Linked To Cold Weather 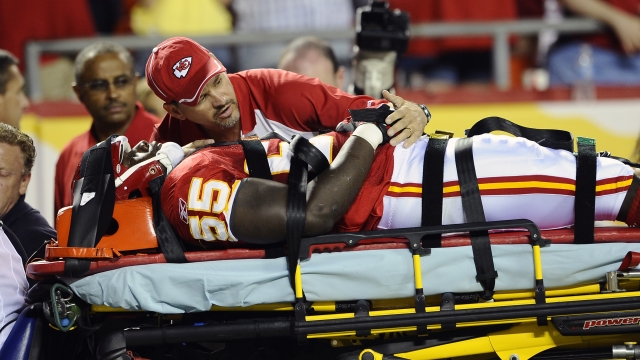 SMS
Brain Freeze: Concussions In The NFL May Be Linked To Cold Weather

By Grant Suneson
March 31, 2016
A new study found that NFL players were twice as likely to get concussions in colder games than those playing in warm weather.
SHOW TRANSCRIPT

As the NFL looks for new ways to prevent concussions, researchers may have a solution: play the games in warmer weather.

After looking at the 2012 and 2013 NFL seasons, a study published in the Orthopaedic Journal of Sports Medicine found players were twice as likely to suffer a concussion during a game played at 50 degrees or below versus one played at 70 degrees or above.

Researchers theorize that's because "at lower temperatures, materials within the playing environment have a lower elastic potential and higher yield stresses."

That basically means cold weather makes the ground and equipment harder and therefore more damaging when you hit your head on it.

Scientists looked at other areas likely to be injured in a game and found that ankle injuries were 50 percent more common in cold-weather games, but that trend didn't carry over to knee, hamstring or shoulder injuries.

Researcher Dr. David Lawrence said he hopes the findings can be used to make football safer, but that more research is needed before they can be put into action.

But with cold-weather stadiums like Lambeau Field in Green Bay, Wisconsin, so entrenched in NFL history, Lawrence probably shouldn't hold his breath.