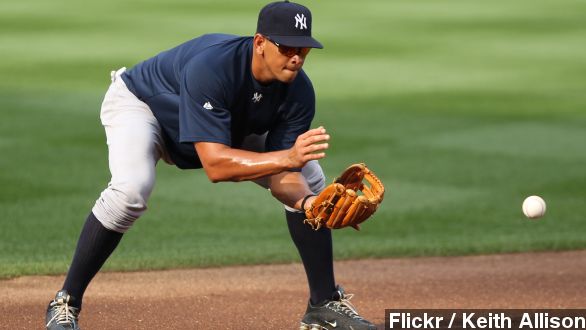 It's been a while since we last heard from Alex Rodriguez and Major League Baseball regarding performance enhancing drugs. (Via Flickr / Keith Allison)

But that just changed. Now, a new book says the MLB gave A-Rod permission to use testosterone in 2007, one of his MVP seasons.

One excerpt reads, "In 2007, of the 1,354 players subjected to testing, 111 were granted a TUE. Only two, apparently including Rodriguez, received an exemption for 'androgen deficiency medications,' the category that would include testosterone."

Basically, an MLB player can apply for a "therapeutic use exemption", or a TUE, under the league's drug policy. This means, if granted, a player can take drugs otherwise banned by the league. Well, the book states, Rodriguez was granted an exemption Feb. 16, two days before he got to Spring Training. (Via Flickr / Keith Allison)

All this, if true, would put the MLB in an awkward position.

Because, the Yankees' third basemen is currently suspended for the entire 2014 season, 162 games, due to the Biogenesis investigation. (Via ABC)

That resulted in Rodriguez inking a new 10-year, $275 million deal in the offseason to become the MLB's highest paid player and eventually its biggest headache. (Via Forbes)

Rodriguez, who turns 39 this month, says he does intend to return to the Yankees once he's eligible.